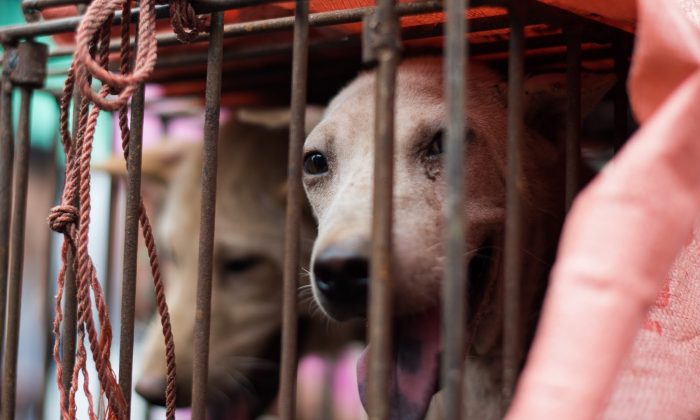 A dog looks out from its cage at a stall as it is displayed by a vendor in Yulin, Guangxi province on June 22, 2015.(Johannes Eisele/AFP/Getty Images)
China

Two years ago, a man surnamed Zhang living in eastern China discovered the body of his missing dog in a neighboring town—his canine companion had already been slaughtered and was about to be sold to a marketplace.

Angry, Zhang reported the matter to the police, who uncovered a crime ring involved not just in stealing pets, but also poisoning them to death and selling the dangerous meat. The case has now entered legal proceedings, the Yangtze Evening News reported on June 29.

Half of the estimated 11,000 pounds of meat was already sold when the police busted the business.

The owner of the processing site that Zhang had found his dog at, Mr. Gan, accepts dogs that are both dead, alive, or subdued by drugs. All dogs, regardless the health standards of their flesh, can be sold across multiple provinces. Gan simply has the meat transported by bus.

Behind a Chinese Cloning Factory, a Shady Cast

One of Gan’s partners, nicknamed “Captain Cat,” is 52-year-old Yi Xi. As his moniker suggests, he has many years of experience in poisoning cats and selling them as meat. He turned to dogs as the demand for feline flesh withered.

Cats and dogs aren’t the only source of tainted meat. The police nabbed eight suspects who poisoned a total of 110,000 birds to be sold to restaurants in the provinces of Shanghai, Zhejiang, and Guangdong.

The suspects obtained the poisons legally and cheaply. Specific agents include cyanide, furadan (used in pesticides), and muscle relaxants.

Prison sentences for the 39 convicts range from eight months to eight years.