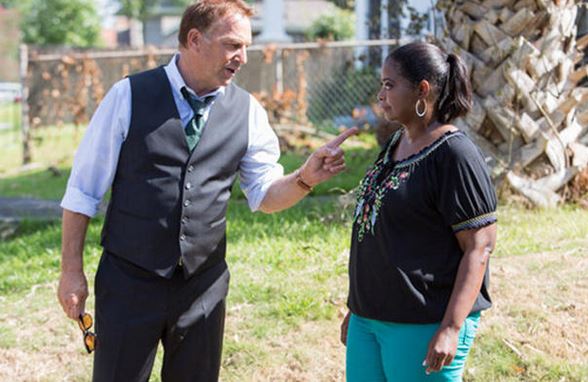 Kevin Costner says that despite his best efforts he couldn’t find financing for the racially charged “Black and White” movie.

“I said it 50 times that we should make this movie and at the end of the day, I had to pay for it,” Costner told the National Association of Black Journalists Convention.

Costner said at the Boston convention that there were a number of challenges to getting the film made.

“I just thought it was an interesting movie … I can’t speak for why [no one would finance it]. I know a lot of people want to make these big, giant movies and I understand … But I thought this movie is just as valid as those movies. So that’s why I made it,” Costner said, reported The Wrap.

The movie was produced under Costner’s Treehouse banner. It was screened for 200 journalists at the convention.

The film follows grieving widower and attorney Elliot Anderson, played by Costner, who is raising his biracial granddaughter Eloise with his wife because their daughter died during childbirth.

But his wife is killed in a car accident, and the other grandmother–black Rowena (played by Octavia Spencer) tries to get custody.

Costner said that there have been struggles getting a lot of movies made that he’s been involved in.

“A lot of movies that I have made in my life have been a struggle for me to make — ‘Dances with Wolves,’ ‘Field of Dreams,’ ‘Bull Durham’ … and in this instance, ‘Black and White,'” Costner told NABJ.

“Sometimes when people are losing an argument, they bring up, ‘well, you’re this, you’re a racist, or you’re something’ and you go ‘no I’m not.’ I found that this movie helped me,” he added.

“This is one of the few movies that actually [deals with race], because people like to skirt around those things. But this is very direct.”