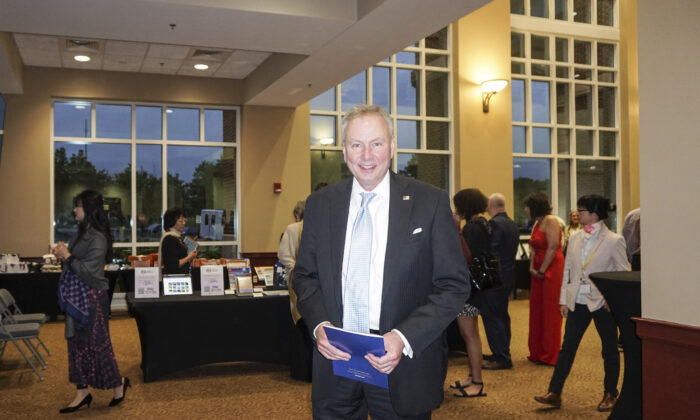 David Nicholson at EKU Center for the Arts in Richmond, Kentucky on May 7, 2022. (Nancy Ma/The Epoch Times)

RICHMOND, Ky.—David Nicholson, a former CEO of a technology company and once mayor of Mason, Ohio, was delighted by the Shen Yun performance at the EKU Center for the Arts on May 7.

“Loving it … every bit of it,” he said, “the colors … the coordination … just beautiful! And the orchestra pit, they sound phenomenal.”

“I can’t say enough good about it,” he added.

Mr. Nicholson commented on the importance of Shen Yun and its ability to introduce Chinese traditional culture to the Western world.

“This group [Shen Yun] is just the only exposure some people will have to this culture—they don’t understand the rich, rich history of China and their spiritual awareness,” he said.

“And I think it’s wonderful that they can see it. I do because I’m a firm believer—the more we all know about each other in the different cultures, the better is the world,” he added.

One of Shen Yun’s unique features is its orchestra. It’s the first in the world to permanently combine classical Western and Chinese instruments within a Western symphony orchestra.

Mr. Nicholson noted the live music accompanying the dances. “They sound phenomenal you know in such a small area where they are and yet the sound is wonderful,” he said.

“I loved the message behind what his words were actually saying … a message of hope [which] is very important,” he said,

He encourages Shen Yun to keep touring with its important mission.

“Please continue to do the hard work, and to deliver your message like that, because it’s so important.”

For Mrs. Quinio the costuming was outstanding as was “the timing of all of their backgrounds and how they could jump in and bring the backgrounds to life—I thought that was pretty amazing.”

According to the company’s website, Shen Yun’s costumes and colors are true to traditional aesthetics and styles, painting each dance piece with the splendor of the past.

“I really like the fabric and the use of the chiffon and how they can throw it and it floats in the air … I just love how it can just move around to tell the story,” Mrs. Quinio said.