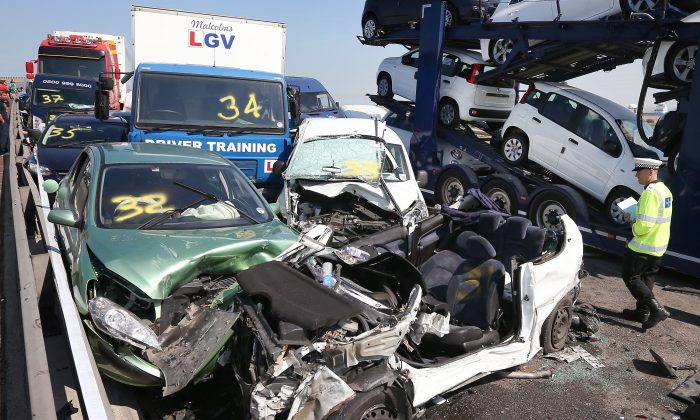 A policeman inspects the site of a major traffic accident on the A249 Sheppey crossing bridge in Kent, England, on Sept. 5, 2013. (Peter Macdiarmid/Getty Images)
UK

At least eight people were seriously injured, but thankfully no one killed, in a 130-car pile up at Sheppey Crossing in Kent, England, Thursday morning.

Emergency rescue workers told the BBC that 27 people were sent to hospital. The Telegraph later reported authorities said 35 were in hospital. firefighters freed at least five people from their mangled vehicles. Kent police reported that about 60 people suffered minor injuries.

Fog is reported to have decreased visibility as drivers approached the bridge.

Driver Martin Stammers told the BBC, “All we could hear was screeching, cars thudding into each other, lorries crashing.” The crashes continued for an estimated ten minutes. Stammers warned others to slow down, and one woman later thanked him for saving her life with his warning.

Witnesses told Kent Online that drivers were moving too fast through the fog, many without lights on.

Kent Fire and Rescue Service reminded people in the wake of the accident to exercise caution in fog: “Keep a safe distance from vehicle in front. Rear lights can give a false sense of security.”

The Red Cross was providing assistance to people stranded in the mayhem, and reported that police have begun to escort people back to their vehicles.

A transport-truck driver may have saved lives by turning his vehicle to block more cars from heading into the collision, reported witness Chris Buckingham.
Buckingham told Sky News: “He was going the other way and what he managed to do, which has probably saved lives, is he’s gone down to the end of the carriageway, gone across the roundabout and actually blocked off the road so no more cars could actually enter the dual carriageway before the emergency services got there.

“Whoever that guy is I’d like to shake his hand because he’s probably saved lives today.”

Chief Inspector Andy Reeves, from Kent Police, told the Telegraph: “From my perspective, it’s truly miraculous. It’s very fortunate there were no fatalities.”

The bridge has been known for collisions during foggy weather, reported Reeves. Conservative Member of Parliament Gordon Henderson had highlighted a lack of lighting on the bridge when it was opened in 2006, reports the Telegraph.