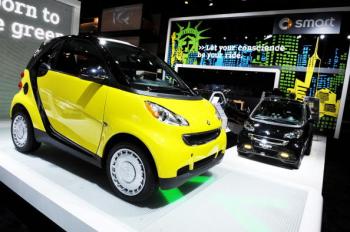 By Ian Ritz
Print
Car price experts at Kelly Blue Book have posted their Green Car list for 2010, marking the vehicles they have found to be the least harmful to the environment, most fuel efficient, delivering a pleasant driving experience and a rational design, as well as reasonably priced.

At the top of the list is the 2010 Toyota Prius, which boasts an average 51 miles per gallon gas efficiency that is made possible by the electric “hybrid power train technology.” The car also features Dynamic Radar Cruise Control along with Lane Keep Assist, which allow for exact speeds when using cruise control and extra guidance to keep the driver from veering off course. Another feature that has helped to put this car on the top of the list is its voice-activated navigation system.

In the number two spot is the 2010 Honda Insight, which averages 41 miles to the gallon with the assistance of a hybrid engine. Like the Prius, the Insight features a voice-activated navigation system along with an “upgraded audio system.” The Insight is more reasonably priced than the Prius but is lacking the exceptional gas mileage.

Rounding out the top five are the 2010 Ford Fusion Hybrid at number 3, the 2010 Volkswagen Golf TDI at number 4, and the 2010 Mini Cooper at the number five spot.

The top four automobiles on the list utilize the electric hybrid technology, with all of them featuring a blend of gas-powered and electric propulsion. Keeping the size of a vehicle small also appears to be vital for securing high mile-per-gallon rates.

The Kelly Blue Book listings for car prices originate from founder Les Kelly, who first started collecting information on car prices in the early 1920s. Kelly started out as a car dealer and went on to become one of the most trusted car price auditors in the world.

For a complete listing of the Kelly Blue Book 2010 Green Cars, visit www.kbb.com.