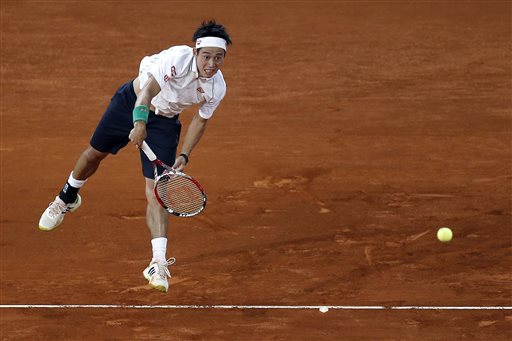 Kei Nishikori and David Ferrer are set to face off in one of the Madrid Open semifinals on May 10.

The game is available via live stream through ATP.

La Sexta will be broadcasting the game in Spain, BSkyB in the United Kingdom and Ireland, Tennis Channel in the United States, and Gaora Sports Channel in Japan. See a full list of broadcasters below and a preview from the Associated Press below that.

MADRID—Defending champion Rafael Nadal gave his clay-court doldrums a boost by reaching the Madrid Open semifinals on Friday with a dominant performance against Thomas Berdych.

In the women’s tournament, two-time defending champion Serena Williams withdrew with a leg injury, while Maria Sharapova ousted Li Na in the quarterfinals.

The top-ranked Nadal had lost his previous two quarterfinal matches on clay for his worst run on the surface in a decade. But buoyed on by a partisan crowd, Nadal overpowered Berdych 6-4, 6-2 to advance at the Magic Box.

“I brought great energy and intensity to it and that’s the best news, that it’s my best (on clay) yet,” Nadal said. “The things that, historically, I’ve done well on this surface I managed to do them again today.”

Nadal has been improving with every match in Madrid after losing at the quarterfinals stage in preceding tournaments in Monte Carlo and Barcelona.

But he showed no sign of the nerves that had uncharacteristically crept into the game of the most successful clay-court player ever as he pushed Berdych to the corners and punished him with a powerful forehand that accounted for 16 of his winners.

“My play is good when I’m hitting my forehand well, especially on clay,” said Nadal, who is vying for his third title in the Spanish capital. “In Monte Carlo I used my backhand more and not my forehand, and when I have to hit five or six backhands in a row it doesn’t help my game.”

Berdych, who dropped to 3-18 against Nadal, couldn’t keep up in the hot sun beating down on Manolo Santana center court.

Kei Nishikori prevented an all-Spanish lineup in the final four by beating Feliciano Lopez 6-4, 6-4 in the late match. The win also ensures that he will become the first Japanese player to break into the top 10 when the new world rankings are released on Monday. Nishikori remained undefeated on clay this season in nine matches after winning the Barcelona Open title.

The top-ranked Williams has had her left thigh heavily bandaged this week and said she injured it during a first-round victory over Belinda Bencic on Sunday.

“It started to get better but, most importantly right now, I just need some time to rest and recover. It’s beyond words. It’s so frustrating,” Williams said in a statement. “This is not the way I wanted this week to end.”

The withdrawal gave 2011 champion Petra Kvitova a walkover and a spot in the semifinals.

The 32-year-old Williams said the injury would not keep her out of the French Open, with the defending champion tweeting she would play in Rome next week before the second Grand Slam of the season starts on May 25.

Li was in control until she failed to convert two break points in the 11th game of the second set. Errors then began creeping into the Australian Open champion’s game as Sharapova evened the match.

After an exchange of breaks in the third set, the ninth-ranked Russian broke again and then held serve to win on Li’s 43rd unforced error.

“It really could have gone her way today. You know, it was just a matter of a few points in the second set,” said Sharapova, who came through despite seven doublefaults. “I was down, I didn’t play a great first set, and I found a way to get myself in a position to be in the third.”