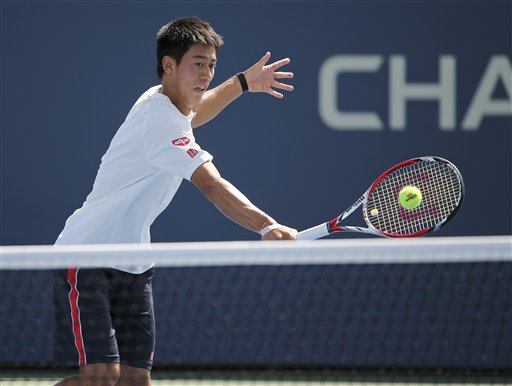 Japanese tennis star Kei Nishikori has made history by becoming the first Asian player to ever reach a grand slam singles final, and will be playing on Monday (Tuesday Japan time) in the US Open final.

Fans are wondering about Nishikori’s personal life, principally whether he has a girlfriend or not.

Nishikori has been linked most recently to Honami Tsuboi, a Japanese gymnast who competed at the 2008 Beijing Olympics.

The pair aren’t often seen in public and it’s unclear if they’re still together.

The couple apparently first met when introduced by a mutual friend, and soon they had dinner together and became a couple.

They became closer when Tsuboi reportedly took care of Nishikori when he was diagnosed with kidney stones, becoming his “personal manager.”

Tsuboi was born on April 5, 1989 in Gifu, Japan and in addition to being an athlete is a certified yoga teacher and has experience in nutritional science after studying the subject at Waseda University, according to Fab Wags. She is reportedly retired from gymnastics now and, per her Facebook page, is teaching yoga frequently.

Nishikori, 24, is the best Japanese tennis player ever and seems to continue to get better. Apparently he lives in Florida and rarely goes back to Japan because of the chaos that ensues due to his popularity.

Check out more in an Associated Press story below.

At 14, Nishikori began path to the US Open final

NEW YORK—Kei Nishikori’s journey to the U.S. Open final began a decade ago, when he was spotted as a teen at a tryout in Japan and invited to move to Florida to attend a tennis academy.

Nishikori was among the first beneficiaries of a project to improve Japanese tennis funded by former Sony executive Masaaki Morita.

“Kei was just 14, and he didn’t speak a word of English,” said Nick Bollettieri, a member of the International Tennis Hall of Fame who coached players such as Andre Agassi, Boris Becker, Jim Courier and Monica Seles. “He was gifted. Great speed. Great eyes.”

As Nishikori worked his way up the world rankings after turning professional in 2007, he became so well-known back home that it seemed less distracting to stay in Florida. On the rare occasions he plays in Japan, tournaments sell out within hours.

Now that he’s the first man from Asia to make it to the final of a Grand Slam singles tournament, his profile — and that of his sport — figures to grow exponentially in his home country. Even though he hasn’t lived there for years, the nation is watching as he heads into Monday’s final against Marin Cilic.

“Even from 17, 18, from when he won his first title, it’s been sometimes even a bit over-the-top, maybe all a bit too early,” said Nishikori’s agent, Olivier Van Lindonk.

“They are so intrigued by their heroes that they want to know everything,” Van Lindonk said. “I’ve heard so many questions about: When did he eat? When did he go to bed?”

Nishikori’s surprising 6-4, 1-6, 7-6 (4), 6-3 victory over No. 1-ranked and seven-time major champion Novak Djokovic in the U.S. Open semifinals began at about 1 a.m. Sunday in Japan, but people across the country stayed awake to keep track.

When the match ended, Nishikori told the crowd in Arthur Ashe Stadium during an on-court interview: “I hope it’s big news in Japan. … I feel the support from Japan. … It’s 4 o’clock in the morning, but I hope a lot of people watched it.”

They did. As soon as he checked his phone, Nishikori found 20 messages from folks in Japan, despite the hour. Hundreds of fans celebrated after following along on television at a hotel in Nishikori’shometown of Matsue, a sleepy town with a population of less than 200,000.

“This is easily the biggest news in the history of Japanese tennis,” said Jun Kamiwazumi, a former member of Japan’s Davis Cup team who reached the third round at the 1973 U.S. Open. “This will have a huge impact on the sport here, and I expect many young children will be inspired to emulate him.”

Others such as Bollettieri and Djokovic echoed that opinion.

“This is definitely huge for Japan. It’s a big country, over 100 million people. This can definitely be a great encouragement for tennis in that country,” said Djokovic, who is from Serbia. “He’s been around for the last couple of years. He’s been making a lot of success. But playing finals of a Grand Slam and now fighting for a title is definitely something different.”

It also will make Nishikori even more money than the $10 million in endorsements he reportedly already earns from sponsors such as clothing company Uniqlo, food company Nissin, and sports equipment company Wilson.

Nishikori, the first man from Japan to be ranked in the ATP’s top 10, has existing contracts that include escalator clauses providing extra money for certain accomplishments, such as reaching a Grand Slam final.

It adds up to a far bigger take than his on-court prize money, which was less than $2 million this season entering the U.S. Open.

But what matters more to the 24-year-old Nishikori, by the sound of it, is the impact he can have in his native country.

“I hope more kids start playing tennis,” he said. “U.S. has a lot of respect for the sports, but not as much in Japan. I hope I can make a little bit difference.”

Given the attention Nishikori is getting, a championship in New York would seem to be certain to reverberate in Tokyo.

“He’s a hero there. He’s been a hero there for a while. Ever since he hit the top 20, it’s been crazy. But we’re getting to another level now,” said Van Lindonk, the agent. “You become very popular when you win.”