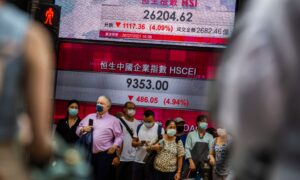 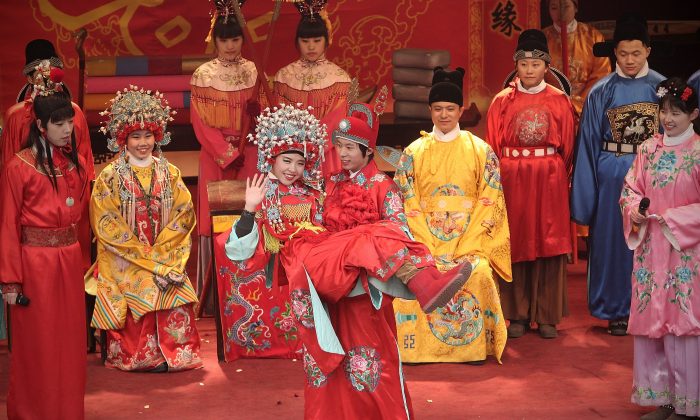 In a traditional Chinese wedding, red is considered an auspicious color, representing love, happiness, and wealth.

The red double happiness symbol is included on invitations, and is used throughout the ceremonies, at receptions, banquets, and celebrations. It symbolizes the newlyweds’ union, and is considered good luck.

In traditional Chinese culture, the dragon and the phoenix, are considered auspicious symbols.

According to ancient records, the dragon was commonly referred to as “the Ruler of Beasts” and the phoenix as “the King of Birds.” As such, the mighty dragon became a symbol of the Chinese Emperor, while the virtuous phoenix was an embodiment of the Empress of China.

Passed down through the ages, the images and patterns bearing the dragon and phoenix have become highly-revered cultural treasures, representing auspiciousness, nobility, peace, and prosperity. They are still used in today’s traditional Chinese wedding ceremonies.

In Chinese history, any recorded appearance of dragon and phoenix was regarded as an extremely auspicious sign, foretelling a peaceful and prosperous period for the people and the country.

Emperor Ku from the period of the Three Sovereigns and Five Emperors (24th-23rd century BC) was said to enjoy music with such appealing tones that it attracted golden dragons and colorful phoenix to appear and dance to the delightful music.

The harmonious co-existence of these two mythical creatures signifies marital harmony, with good blessings bestowed upon the bridal couple.

Historically, the bride and groom’s very unique wedding outfits play the most significant part in the wedding.

Despite a wide variety of style and element choices in Chinese regions, typically, wedding clothes for the bride and groom include red as the base color with a dragon and phoenix design.

The bride’s dress is a Chinese-style long gown called a Cheongsam, which features an embroidered phoenix and embodies the beauty of a Chinese traditional costume, while the groom’s clothing often has two pieces, a coat over a long robe embroidered with a dragon.

In traditional Chinese weddings, the color white is rarely seen. White flowers, which signify death and funerals, are hence avoided.

Flowers like peonies, daffodils, orchids and lotus are often used in bouquets and floral arrangements. These flowers have special meanings in Chinese traditions—the peony symbolizes wealth and nobility, the daffodil spring and renewal, the orchid beauty and fragrance, and the lotus love. It is interesting to note the lotus flower is also a symbol of purity in Buddhism.

Noisy Procession to Fetch the Bride

Traditionally, firecrackers were used to frighten and ward off evil spirits. After the evil had been purged people were able to express their happiness.

Firecrackers are often found in Chinese weddings. The more powerful and loud the explosion, the more good luck is brought to the bridal couple.

Gongs, drums and plenty of noise marks the start of the wedding procession from the groom’s home to the bride’s home, frightening away any evil spirits that may interfere with the couple.
After collecting the bride, the procession snakes its way back to the groom’s house, symbolizing the transition from her own family to her husband’s.

Red beans are used to make bean paste as a sweet desert, representing  wishes for a happy life for the couple.

The words “seed” and “son,” and “date” and “early” are homophones-they are pronounced the same way but differ in meaning and spelling.

Following the ancient traditions, red dates, dried longans, peanuts, lotus seeds together with fruits like oranges and pomegranates are placed or scattered on the bridal bed, the more, the merrier, with wishes for the conception of a healthy baby.

In traditional Chinese culture, hair is often taken as pledge of love or token of marriage, as one’s hair represents oneself.

The bride and groom each cut off a piece of their own hair, which is then tied together and put into a bag for the bride to keep.

This token of marriage signifies the two people tying their knot, becoming inseparable, and spending the rest of their lives together.

Translated by Euly Luo. Written in English by Christine Ford.