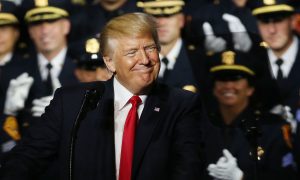 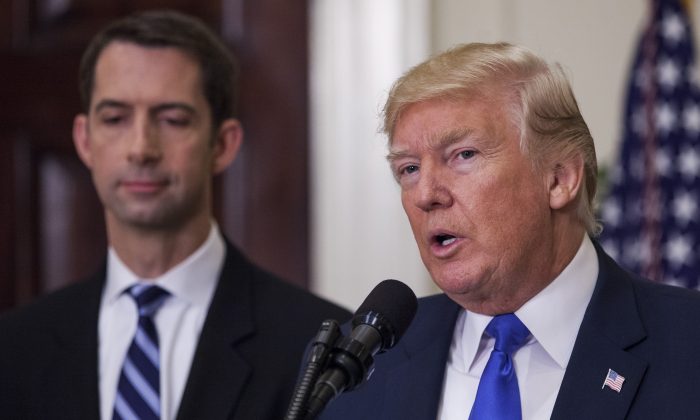 President Donald Trump makes an announcement on the introduction of the Reforming American Immigration for a Strong Economy (RAISE) Act in the Roosevelt Room at the White House on August 2, 2017 in Washington, DC. Pictured at left is Sen. Tom Cotton (R-AR). ( Zach Gibson - Pool/Getty Images)
Politics

Taking a page out of the Canadian playbook, President Donald Trump announced on a merit-based overhaul of the U.S. immigration system on Thursday.

The Reforming American Immigration for a Strong Economy Act, or the RAISE Act, would refocus the U.S. immigration system on bringing in capable immigrants with a strong likelihood of assimilating.

The act awards points based on preferred attributes including education and English proficiency, just as Canada’s immigration system does.

The goal of the act is to amend the Immigration and Nationality Act to establish a skills-based immigration points system, notes an introduction to the act. It will also focus family-sponsored immigration on spouses and minors.

The act would limit refugees to 50,000 a year and bring in 140,000 immigrants annually through the points-based system.

Immigrants brought in through the system will not qualify for federal means-tested public benefits for 5 years.

President Donald Trump said this new competitive application process will favor applicants who can speak English, support themselves, and bring skills that will contribute to the U.S. economy.

“The RAISE act will help ensure that newcomers to our wonderful country will be assimilated, will succeed, and will achieve the American dream,” he said.

The act lays out requirements to score points, with educational attainment and English proficiency being the most crucial, followed closely by age. An applicant needs to score 30 points to join the pool of qualifying potential immigrants.

Working-age applicants get more points than those too young to work full time or too old to spend the majority of their working years in the United States. The system gives maximum points to those aged 26 through 30, with points reducing in 5-year increments as the age moves further away from that range.

According to the act, education points are contingent on the foreign schools being recognized by a list maintained and regularly updated by the Director of U.S. Citizenship and Immigration Services and the Secretary of Education.

Applicants with a doctorate or professional degree in science, technology, engineering, or mathematics (STEM) earn the maximum 13 points. Applicants who only have a high school degree earn the least, only 1 point.

The act lays out a couple of categories for exceptional individuals, namely Nobel laureates or those with similar recognition, and Olympic-level athletes. Laureates get 25 points, while athletes who have have won an Olympic level or taken first place in an international sporting event of Olympic calibre in the preceding 8 years get 15 points.

Applicants can also get extra points if they have a job offer from an employer willing to pay over the median salary. The higher the salary, the more the points.

Unlike the Canadian system, which has a separate immigration pathway for investors, the RAISE Act awards points based on how much money in foreign currency an applicant is willing to invest in a new commercial enterprise in the United States for at least three years and maintain an active role in the management of the business as their primary job.

The RAISE Act sets out a review schedule for the points system to ensure it meets four broad criteria. The act requires the points awards to be evaluated and possibly adjusted every four years to help achieve GDP growth, enhance the prospects of immigrant success, improve fiscal health of the U.S., and protect American workers.