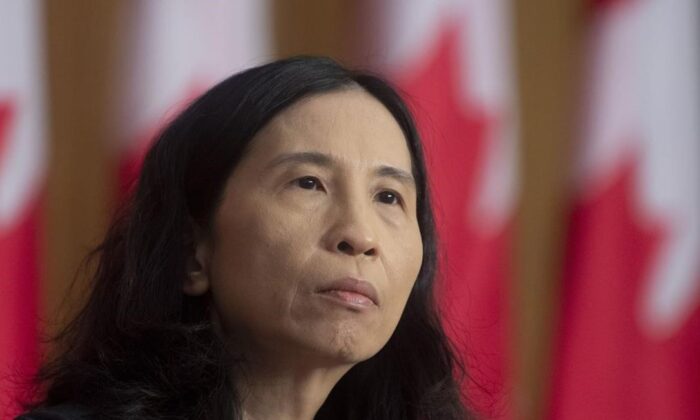 Federal health authorities provided an update on COVID-19 on Friday, in the midst of worries about the spread of monkeypox, and encouraged individuals to maintain personal measures as a downward trend in disease activity is observed.

Tam said that with provinces and territories lifting restrictions, not only have COVID-19 transmission rates rebounded, but also those of influenza, which she says has reached “seasonal threshold,” something abnormal for this time of year.

The federal government is moving much slower than other jurisdictions in lifting restrictions, but it announced this week the easing of rules in the workplace.

Health Canada updated its guidelines for public service workplaces on May 16, dropping the masking requirement for sitting at a desk or attending a meeting when physical distancing can be maintained.

Despite this announcement and other jurisdictions dropping mask mandates, Tam still encourages people to wear masks.

“The more people who maintain masking in indoor public spaces or crowded areas, the better they will work to reduce overall transmission of respiratory diseases,” she said.

Tam also warned of an uptick in transmission due to social gatherings over the long weekend and recommended “lower risk activities and settings.”

The chief public health officer also said she is monitoring for the evolution of new variants and new surges that could occur, “particularly in under-vaccinated populations.”

Along that line, Tam continued to promote increasing vaccine coverage, “even though it may not be as effective against transmission. Thus far, we see that vaccines provide good protection against serious consequences.”

She said that a vaccine booster does “boost your vaccine effectiveness against infection and transmission, but that wanes over time.”

Currently, the latest variants appear to disproportionately affect individuals who have received a booster dose. Data from Ontario and Quebec suggests that the boosted are getting infected at two to three times the rate of the unvaccinated.

For severe outcomes, the seven-day average death rate in Ontario for the vaccinated with a booster has been higher than for other categories since early May. It was significantly higher for the unvaccinated prior to April.