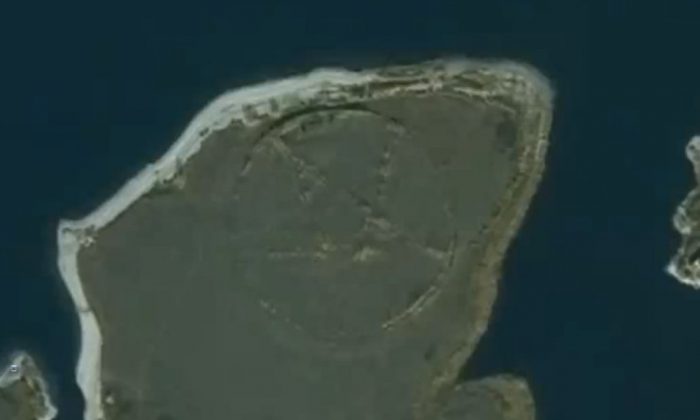 A screenshot shows the purported Kazakhstan pentagram.
Beyond Science

A pentagram in Kazakhstan 1,200 feet across has many scratching their heads, but there’s an explanation, says one scientist.

The pentagram–a five-pointed star in a circle that is sometimes used in Satanism–is only visible from the sky and Google Earth. The monument is located in a remote area in Kazakhstan near Lisakovsk.

As the Huffington Post points out, there have been a number of conspiracy theories about the star

Another person, Kurt Yates, said that the site was an abandoned surface-to-air missile site, purportedly used by the Soviets, as Kazakhstan was part of the Soviet Union before its dissolution. “The shape has something to do with how their tracking radars work,” he said.

But Emma Usmanova, an archaeologist who works around the area, told LiveScience.com that the pentagram “is the outline of a park made in the form of a star.” She notes that the star was popular during the Soviet era.

Despite its occult symbolism, it has been pointed out that the pentagram was used. Mesopotamians, Pythagoreans (who followed Pythagoras of ancient Greece), and Freemasons used the symbol.

One YouTube user wrote: “Whats so “devil” about it? Ancient cultures used this simbol [sic] for luck and protection, long time before anybody heard about satan, devil or lucifer. It has nothing to do with evil, actualy pagans (everybody whos not judeo-christian) used it as defence [sic] against all sorts of evil.”