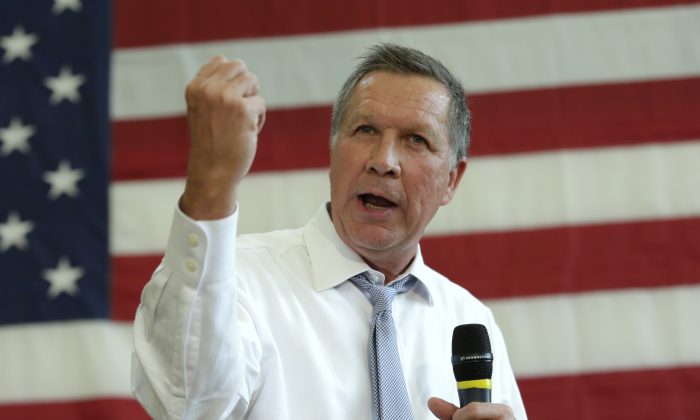 “Thankfully, there are still leaders in this country who put principles before politics,” said John Weaver, Kasich’s adviser before targeting Priebus directly in the statement.

“The idea of a greater purpose beyond oneself may be alien to political party bosses like Reince Priebus, but it is at the center of everything Governor Kasich does,” he continued.

Kasich dropped out of the race in May with no clear path to victory after having won only his home state, leaving only Senator Ted Cruz (R-Tx.) and Donald Trump in the race. Cruz, just like Kasich, has refused to endorse the Republican nominee.

“The Governor is traveling the nation supporting down ballot Republicans and preventing a potential national wipeout from occurring on Reince’s watch,” Weaver said in the statement.

On Sunday, Priebus was on CBS’s “Face the Nation” and said that Trump’s primary challengers need to “get on board.”

“If they’re thinking they’re going to run again some day, I think that we’re going to evaluate the process of the nomination process, and I don’t think it’s going to be that easy for them,” Priebus said.

The RNC chairman pointed out that the primary challengers had given “their word” during the primaries and that the political process requires the former challengers in certain states to endorse the party’s nominee regardless of who it is.

“People in our party are talking about what we’re going to do about this,” Priebus said. “There is a ballot access issue in South Carolina. In order to be on the ballot in South Carolina, you actually have to pledge your support to the nominee, no matter who that person is. What’s the penalty for that? It’s not a threat. It’s just a question that we have a process in place.”

Trump has previously called the non-endorsements from his former primary opponents “disgraceful,” citing the pledge the candidates—including Trump—took.

“They signed a pledge saying they will abide, saying they will back the candidate of the party. And now they sit back,” Trump said at a rally in Bangor, Maine at the end of July. “They broke their word. In my opinion, they should never be allowed to run for public office again. Because what they did is disgraceful.”

Kasich has repeatedly refused to to endorse Trump, and said in an interview that aired Sunday with “Meet the Press” that he was ruling out voting for Clinton and said “it’s very, very likely I will not” vote for Trump.

The Ohio Governor was criticized for not attending the Republican National Convention in his home state.

“My actions have spoken louder than any words. And think about this: I want to know when anybody had a convention in their state when they were the governor who didn’t go into the convention hall,” Kasich said in an interview with CNN last month.