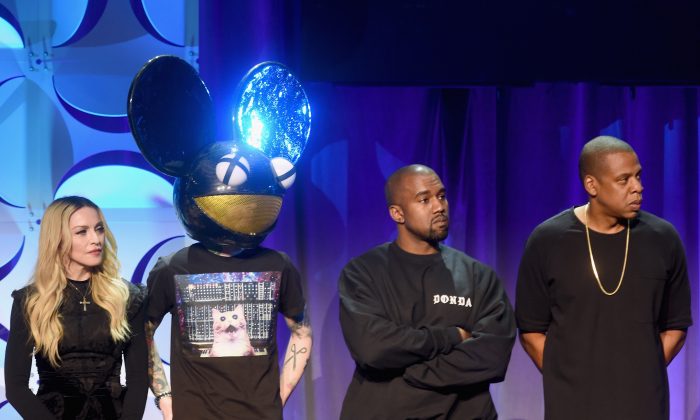 Kanye West is causing a ruckus on social media again.

This time, he didn’t start the fire—at least not intentionally. Musician Deadmau5 called out West for apparently searching for a file-share copy of Serum, a music producing software, on the Pirate Bay, underscoring Kanye’s hypocrisy.

Let’s start a Kickstarter to help @kanyewest afford a copy of Serum.

Earlier this month, West reportedly met with lawyers to discuss filing a lawsuit against the Pirate Bay because his new album, The Life of Pablo, was being shared on the website.

West fired back at length, dishing out a long list of insults, beginning with making fun of Deadmau5’s name and his attire (the musician often wears a mouse costume on his head).

# whose job is it to carry the head on the plane # hash tag # do you check the mickey mouse head or carry on # does it get hot?

# ok another super serious question … is there a portable fan situation?

West then proceeded to go after Deadmau5’s perceived lack of popularity on Tidal, the music platform where Kanye released his new album.

# hash tag you raised Tidal’s subscriptions by a whopping 🐭🐭🐭downloads

# I’m bored ### when you get married will your wife have a giant minnie mouse head? # This brightened up my day… thank you dead-mow-five

And then, back to the costumes.

Do you do birthday parties?? My daughter loves Minnie mouse…

Kanye has had quite the month on social media, drawing attention for his defense of Bill Cosby and begging for money from Mark Zuckerberg.