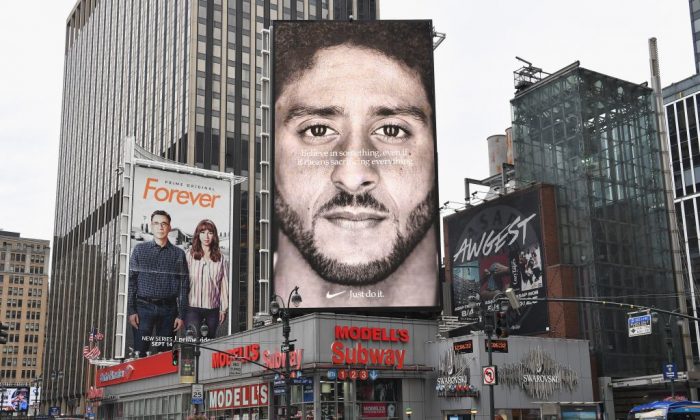 Kaepernick ‘Absolutely Wants to Play’ in NFL, His Lawyer Says Patriots or Panthers Might Bid

The lawyer for former NFL quarterback Colin Kaepernick said that his client wants to play in the NFL, adding that two teams likely to be interested in signing him on are the Carolina Panthers and New England Patriots.

Kaepernick’s attorney Mark Geragos told CNN in an interview on Feb. 16 that he believes in the next few weeks “somebody is going to step up.”

“It would not surprise me if Bob Kraft [the owner of the Patriots] makes a move,” he said in the interview.

Geragos said that Kaepernick, who hasn’t played football since the 2016 season, “absolutely wants to play, he wants to compete at the highest level.” He added that his client is “only 31 years old, he’s not someone who’s over the hill, this is someone who’s in his prime, you get smarter at that position.”

Kaepernick and Carolina Panthers safety Eric Reid jointly announced Friday, Feb. 15, they have settled a complaint claiming football team owners colluded to keep them out of the NFL because they had protested by kneeling during the pregame playing of the National Anthem.

Geragos issued a statement, which said, “For the past several months, counsel for Mr. Kaepernick and Mr. Reid have engaged in an ongoing dialogue with representatives of the NFL,” the statement read. “As a result of those discussions, the parties have decided to resolve the pending grievances. The resolution of this matter is subject to a confidentiality agreement so there will be no further comment by any party.”

“I can tell you it was a long and unconventional legal journey,” Geragos said in the CNN interview, “in the sense that we brought it under the collective bargaining agreement—it was not a traditional lawsuit.”

Kaepernick filed the grievance in October 2017 under the collective bargaining agreement alleging collusion against signing him to an NFL contract, reported ESPN.

Prior to the announcement of resolution, a full hearing before an arbitrator had been expected, along with a ruling on the grievance, in which Kaepernick alleged a conspiracy to keep him off the field because of his protests to draw attention to perceived racial inequality and social injustice.

While Kaepernick has gained a following, his actions have also been criticized for being misdirected, and for politicizing the NFL, which has since been mired in controversy and dwindling ratings.

Reid, 27, joined Kaepernick in kneeling, beginning during the exhibition season in 2016. He continued his protests in 2017 with the 49ers and last season with the Carolina Panthers, reported NBC Sports.

While Kaepernick did not go through the NFL Players Association (NFLPA)—the labor union that represents league players—in filing the grievance, choosing instead to go with a private lawyer, the NFLPA released its own statement following the announcement of the settlement.

“Today, we were informed by the NFL of the settlement of the Colin Kaepernick and Erick Reid collusion cases. We are not privy to the details of the settlement, but support the decision by the players and their counsel,” the NFLPA said.

The Epoch Times reporter Tiffany Meier contributed to this report.