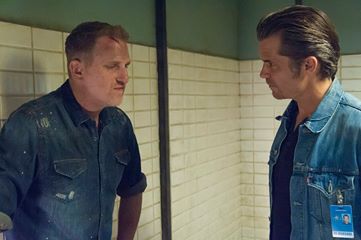 Justified Season 5 Spoilers: Raylan and Boyd in Trouble in Episode 11?

Justified returns to FX Network on Tuesday night with an all-new episode, airing from 10 p.m. to 11 p.m. ET.

In the episode, titled “The Toll,” a shooting happens close to home for Raylan and Boyd.

It forces them to decide which lines they’re willing to cross.

Boyd is coming off learning from Ava that she wants to go it alone for now.

Ava also set out to kill Judith after Judith rejected her offer to work together and barely walked out alive after a brawl.

Joelle Carter told TV Guide about Ava after the break up: “She has the drugs coming in. She knows Boyd well enough that she knows he’s not going to stop that. As angry as he may be at her, he doesn’t want to see her die, obviously. I think she knows the only thing she has to do now to be in a place of safety is kill Judith.”

She added about the situation with Judith: “Ava’s not a killer for the flavor of killing. All her kills have been justified or for her own protection or for survival. I think Ava honestly feels like the planet is a better place without those people. I don’t think she can freely feel that way about Judith. But Judith couldn’t take that deal for them to try to work together again, and Ava just survives like we see her do. It’s emotional. It’s a hard thing to know that you’ve put somebody down, even if it’s for your own perseverance.”

Meanwhile, there’s still a chance for Boyd and Ava in the future.

As for what’s coming up on the show, including its newly announced sixth season, Timothy Olyphant recently said that “It has to come down to Ava and Boyd and Raylan,” reported Variety.

“I would be very curious to how those three points of view, those three storylines can sustain an entire series and allow the other characters to simply support them,” Olyphant said

“There are bumps, but I’m holding out for them!” said Carter. “So, I would hope that everyone else will hold out for them too. It’s been bruised a little bit, their relationship. It’s tender right now, and they’ll have to figure out how to mend it and overcome that if they can. And they have to figure out who they are now.”