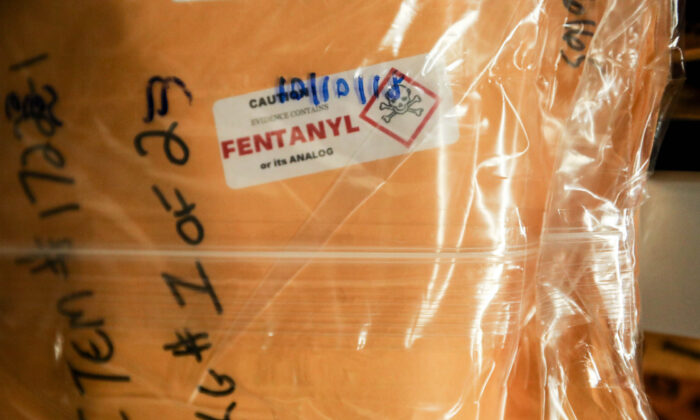 A package of seized fentanyl in the evidence room of the Pinal County Sheriff’s Department in Florence, Ariz., on Nov. 12, 2019. (Charlotte Cuthbertson/The Epoch Times)
US News

The Justice Department (DOJ) has called on the U.S. House of Representatives to extend the illegal status of fentanyl and related substances, which is set to become legal next week without a vote to extend the ban in the lower chamber.

“Sadly, in 2017, more than 1,000 Americans died every two weeks from fentanyl and fentanyl-related substances,” Deputy Attorney General Jeffrey Rosen said in a statement on Monday. “If the House fails to act by midnight on February 6, traffickers of deadly opioids will again have the upper hand.  This cannot be allowed to happen. The House of Representatives needs to act to help save Americans from more overdoses and deaths.”

Fentanyl is a synthetic opioid 50 times more potent than heroin—where two milligrams of the drug can be lethal for a non-opioid user. The drug was subject to a temporary emergency order that lasts two years that made it and other related substances illegal. The substance, which is primarily manufactured in China, was responsible for 40 percent of around 70,500 drug overdose deaths in 2017, according to Centers for Disease Control and Prevention data.

The temporary order issued by the department’s Drug Enforcement Administration (DEA) in February 2018 places all fentanyl-like substances under Schedule I of the Controlled Substances Act, which are defined as drugs with “no currently accepted medical use and a high potential for abuse.” Following the temporary classification, the United States saw a 50 percent decrease in fentanyl-related substance encounters across the country, Rosen said. The order is set to expire at midnight on Feb. 6.

The Senate passed a bipartisan bill, known as the Temporary Reauthorization and Study of the Emergency Scheduling of Fentanyl Analogues Act, on Jan. 16, extending the DEA’s temporary scheduling of fentanyl-related substances for another 15 months. The House now faces a tight deadline to pass an extension on the temporary scheduling given that it only has less than a week of legislative days before the ban expires. The House is scheduled to hold a hearing on fentanyl analogues on Tuesday.

Rep. Doug Collins (R-Ga.), the ranking member of the House Judiciary Committee, expressed concerns over the looming deadline to The Washington Times. He accused his Democratic colleagues of putting impeachment proceedings over addressing the issue of fentanyl, saying that the committee and House leaders have “failed to do their jobs.”

“Chairman [Jerrold] Nadler and Speaker Pelosi have been so consumed with impeachment, they’ve failed to do their job. While Democrats are playing politics, the ban on a deadly drug hangs in the balance,” Collins told the newspaper.

“Failing to extend the ban of this dangerous drug will put countless lives at risk, which is why Congress must act now. I’m calling on Chairman Nadler and Speaker Pelosi to bring this bill to the floor for a vote immediately,” he said.

The Epoch Times has reached out to Pelosi and Nadler’s offices for comment.

The DOJ head, Attorney General William Barr, wrote an op-ed published in the Washington Post earlier this month, urging Congress to reauthorize the scheduling of the drug under the act. He said that the House “has yet to make public any rationale for the delay,” while adding that “without congressional action, the Justice Department would not have the legal tools to prevent” an onslaught of newly legalized fentanyl.

“By attacking the overdose crisis on a broad front, the Trump administration in 2018 was able to stop the increase in overdose deaths, and even slightly reduce them, for the first time in several decades. Much of that success stemmed from substantial progress in controlling the abuse of legal opioids. But the progress will be reversed if the country is hit by a tsunami of newly legalized fentanyl analogues,” Barr wrote.

“The Senate is poised to act, and the House should follow suit. Thousands of American lives are in the balance,” he added.