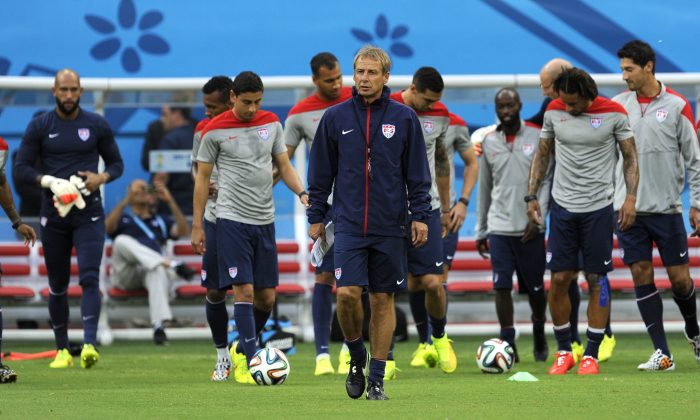 United States' Jurgen Klinsmann, center, walks on the pitch with his team during a training session at the Arena da Amazonia in Manaus, Brazil, Sunday, June 22, 2014. (AP Photo/Paulo Duarte)
Soccer

Jurgen Klinsmann, the coach of the U.S. men’s national soccer team, has a wife and two children, including a son.

Klinsmann was born in Göppingen, Germany in 1964.

Klinsmann studied to be a baker, as his family owns a bakery, but eventually became a professional footballer.

While playing in Europe, Klinsmann met his wife, Debbie Chin, a Chinese-American working abroad who is also a former model.

Chin began her modeling career at age 17 and worked in New York, Milan, and Paris for Elite. She left her work to raise her two children.

After Klinsmann retired after the 1998 FIFA World Cup, he and Debbie moved to the United States.

They currently live in California with their children, Jonathan and Laila, near Chin’s parents. Jonathan became known to U.S. soccer fans after making fun of Landon Donovan after his father left the star off the 2014 World Cup team. Jonathan infamously tweeted about it, but later deleted his account.

Besides having an American wife and living there, his friends and others who know him says that Klinsmann is more American than German.

“He’s more American than a German,” said Berti Vogts, who coached Germany with Klinsmann as his star striker and is now a U.S. special adviser, according to the Tampa Bay Times. “Jurgen is always positive. That’s an American way of life.”

“I think it’s a natural process that everyone of us goes through when he lives over a longer period of time in a different country,” added Klinsmann.

As for Klinsmann’s salary, he is making $2.6 million a year, according to the Daily Mail. That makes him the 10th highest-paid coach in the World Cup, between Alberto Zaccheroni of Japan and Didier Deschamps of France.