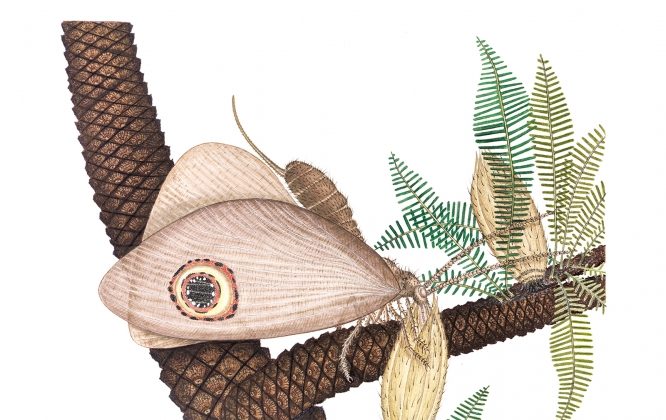 Scientists have discovered a connection between ancient lacewing fossils and modern butterflies, leading them to dub the former “Jurassic Butterflies.”

The large butterfly-like insects fluttered throughout Eurasian woodland during the Mesozoic era, and have been extinct for more than 120 million years.

The new analyses of fossils recently found in northeastern China by scientists at the Smithsonian’s National Museum of Natural History show that the lacewings were “surprisingly similar” to modern butterflies, which didn’t appear on Earth for another 50 million years.

The researchers, led by Smithsonian paleoecologist Conrad Labandeira, found that lacewings likely served as pollinators using mouth parts that bear striking resemblance to the elongated structures that modern butterflies use to sip fluids from flowering plants.

The lacewing wings also bore eyespot patterns that closely resemble those found on some butterflies today, which may have helped to distract or deter potential predators. The eyespots of both creatures contain melanin, discovered through chemical analysis.

“That, in turn, suggests that the two groups of insects share a genetic program for eyespot production,” Labandeira said in a statement.

“The last common ancestor of these insects lived about 320 million years ago, deep in the Paleozoic. So we think this must be a developmental mechanism that goes all the way back to the origins of winged insects.”

The results were published on Feb. 3 in the journal Proceedings of the Royal Society B.