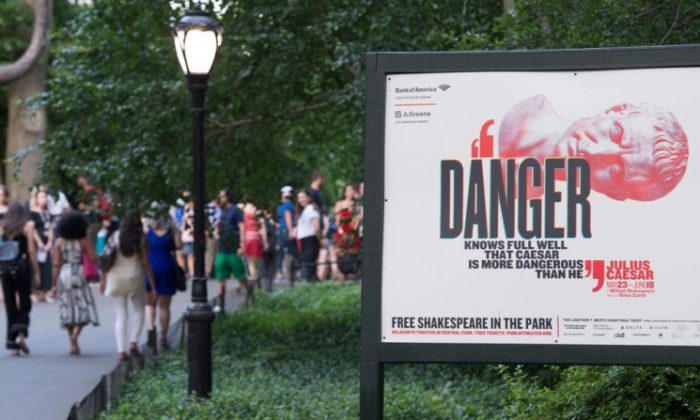 The play has been in previews in Central Park since May 23 as part of ‘Shakespeare’s in the Park’ festival.

The apparent reference caused a lot of criticism, which lead to the theater’s loss of its long time sponsors Delta and Bank of America.

“No matter what your political stance may be, the graphic staging of ‘Julius Caesar’ at this summer’s free Shakespeare in the Park does not reflect Delta Air Lines’ values,”

“Their artistic and creative direction crossed the line on the standards of good taste,” the company said. “We have notified them of our decision to end our sponsorship as the official airline of the Public Theater effective immediately.”

Bank of America has sponsored Shakespeare in the Park for 11 years, but withdrew funding for Julius Caesar’s production.

“The Public Theater chose to present ‘Julius Caesar’ in a way that was intended to provoke and offend,” Ms. Atran said. “Had this intention been made known to us, we would have decided not to sponsor it. We are withdrawing our funding for this production.”

Another main sponsor, American Express, did not mention revoking their sponsorship, but the bank also made clear it does not support the new version of “Julius Caesar.”