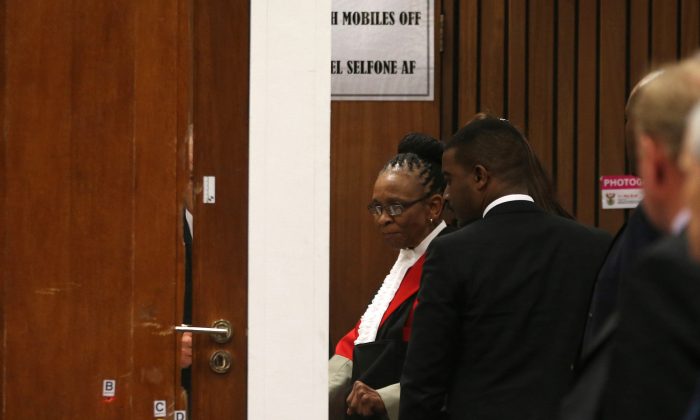 In this Friday, May 9, 2014 file photo Judge Thokozile Masipa, to right of door in red cape, and her advocates examine the bullet-riddled toilet door up close during expert forensics evidence being given at the Oscar Pistorius murder trial in in Pretoria, South Africa. Judge Masipa is expected to announce her verdict after summing up Thursday and Friday in Pistorius' murder trail after scrutinizing evidence given by 37 witnesses in a court transcript running to thousands of pages in a drama that has played out over six months. (AP Photo/Themba Hadebe, Pool, File)
Africa

Judge Thokozile Masipa is the South African judge who will render the verdict in the Oscar Pistorius trial.

She rendered the first part on Thursday and will hand down the second part on Friday.

Masipa is a former social worker and crime reporter, which led to her interest in law and the legal system. Her stories often focused on the indignities of life under apartheid.

When Masipa was named a judge in the Transvaal division in 1998, she became only the second black woman on the High Court Bench after former Constitutional Court judge Yvonne Mokgoro, according to the Mail & Guardian.

Masipa, who obtained her law degree at the age of 43, has also served on other courts, including the Electoral Court of South Africa.

Before the Pistorius case, Masipa was very much unnoticed by the larger population, presiding over mostly low-profile cases or the occasional medium-profile case. But colleagues said that she would perform well.

“Some judges like to get up there and perform with everyone watching,” said one officer of the court before the trial started.

“Some think it’s a good thing that justice is seen to be done; they handle it. [Masipa] is a bit shy, a bit reserved. I don’t think she’ll like the spotlight, but she’ll be okay.”

Others familiar with her judgement said that her work has been eloquent and considered, and that her peers have respected her rulings.

The Times Live reported that Masipa is known in legal circles for being 100 percent thorough and conscientious.

“She is not a dazzler, she does not shine, she’s not brilliant, but she’s steadfast and worthy,” said a senior advocate.

“She works incredibly hard. She crosses all her t’s and dots all her i’s. She was probably the student who always got all the prizes for working the hardest.”

Masipa grew up in Soweto, Johannesburg in a small, two-bedroom house, sharing a room with her siblings.

She graduated from the Immaculata High School in 1966. She earned a Bachelor’s in Social Work in 1974 from the University of South Africa. She later earned her law degree at the same university.

In a documentary, Courting Justices, that focuses on female judges in the country, Masipa said that the high expectations people have of judges puts a lot of pressure on judges, but other scenes showed her happily singing along and clapping hands with young children at a crèche near where she grew up in Orlando East, Soweto.

Once she was married to her husband Makhutla, they lived in a one-room home “served as a bedroom, bathroom, study, you name it,” she said. “During that period, I learned to interact with various people at all levels.”

Masipa’s previous cases include one involving an alleged serial rapist and robber Shepherd Moyo, whom she sentenced to 252 years in jail.

In her judgment, she said: “The worst in my view is that he attacked and raped the victims in the sanctity of their own homes where they thought they were safe.”

“The minister is not party to that contract and has no right to interfere with it. The minister performs no executive role in Eskom.”

In another relatively high-profile case, Masipa sentenced policeman Freddy Mashamba to life in prison for shooting and killing his former wife after a fight over their divorce settlement.

“No one is above the law,” Masipa said. “You deserve to go to jail for life because you are not a protector. You are a killer.”