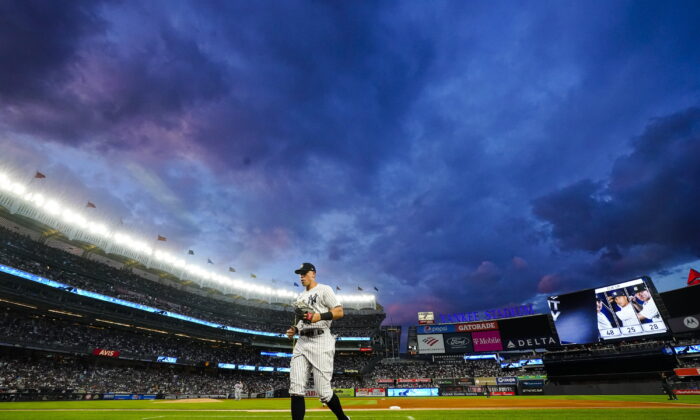 NEW YORK—Aaron Judge hit a 453-foot drive halfway up the bleachers for his 48th home run and added an RBI single during a seventh-inning rally, boosting the New York Yankees past the Mets 4–2 Tuesday night for a two-game sweep in a Subway Series both teams hope was a World Series prelude.

In a game full of crazy plays, a boisterous crowd of 49,217—the most at Yankee Stadium in the regular season since the 2013 opener—stood for the bottom of the ninth as the Mets loaded the bases with two outs on a hit and two walks against rookie Clarke Schmidt (5–2).

Wandy Peralta relieved and retired Francisco Lindor on a flyout for his second save.

Andrew Benintendi had his third straight big day at the plate, singling in the go-ahead run for a 3–2 lead in the seventh against Joely Rodríguez (0–3).

The hit came after pinch-hitter Jose Trevino’s twisting popup fell just fair next to Pete Alonso down the right-field line.

Judge followed with a two-out run-scoring single against Adam Ottavino. Judge leads the majors in homers and with 105 RBIs.

He took a 3–2 splitter for a bases-loaded walk in the fourth against Taijian Walker for his first big league RBI, preserved the lead in the fifth when he threw out Brett Baty trying to score from second on Starling Marte’s RBI single and singled to start the seventh-inning rally.

The Yankees, who have won three straight games for the only the second time since the All-Star break, overcame a mental gaffe by second baseman Gleyber Torres, who sprinted in a vain attempt to catch the trailing runner as Alonso scored the tying run unchallenged in the sixth.

The Mets, whose NL East lead over Atlanta was cut to two games, swept a two-game series from the Yankees at Citi Field last month.

With both New York teams in first place, their fans are looking ahead to a possible rematch of the 2000 World Series, won by the Bronx Bombers in five games.

The Yankees lead the AL East by eight games.

Frankie Montas had the best of his four starts since the Yankees acquired him from Oakland, allowing two runs and six hits in 5 2/3 innings.

Walker retired his first nine batters on 29 pitches, then gave Benintendi’s leadoff single in the fourth and struggled from the stretch and needed 36 pitches to get three outs.

Walker has allowed a home run to Judge in four straight starts against the Yanks.

Mark Canha doubled leading off the fifth and Baty reached on catcher’s interference by Kyle Higahioka. Tomás Nido sacrificed, Nimmo lined out and Marte hit an opposite-field single to right.

Cabrera charged and made a one-hop throw to Higashioka, who tagged a headfirst Baty on the chest.

Torres allowed the Mets to tie the score in the sixth when Jeff McNeil doubled to deep center, Judge made a strong throw to Torres and Alonso held up after rounding third.

Seeing McNeil far past second, Torres sprinted from the grass toward second with the ball in an attempt to tag McNeil, but he lost track of Alonso, who headed home–even as Kiner-Falefa pointed at the lead runner,

Montas escaped a two-on, no-outs jam in the second when Nido hit a slow chopper to Kiner-Falefa.

The shortstop made a short glove flip to Torres, who made a barehand grab, stepped on second and threw to first baseman Anthony Rizzo for an inning-ending double play.

With two on and no outs in the eighth, Daniel Vogelbach hit into a 6–4–3 double play.

Alonso snapped a bat over his left leg after striking out in the fourth.

RHP Carlos Carrasco, who last pitched August 15 due to a left oblique strain, is on track to return during the first week of September.

Yankees: OF Giancarlo Stanton hit against RHP Luis Severino in a smiluated game will be activated before Thurday’s trip opener at Oakland, Stanton has been sidelined since July 23 because of left Achilles tendinitis.

Severino threw 24 pitches, reaching 95–96 mph. He is on the 60-day IL and eligible to be activated in mid-September.

LHP Zack Britton is to start a minor league rehab assignment with Class A Tampa on Wednesday, another step in his return from Tommy John surgery last Sept. 8. Britton likely will face three batters and throw up to 15 pitches, Boone said.

RHP Domingo Germán was able to run, a day after taking a 104 mph comebacker off his left calf.