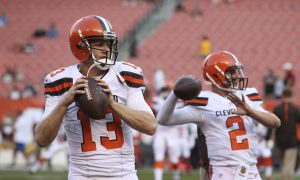 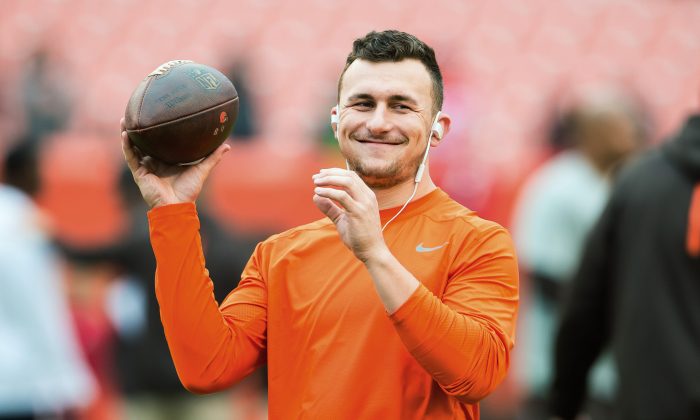 Manziel was seen in West Hollywood leaving The Nice Guy (restaurant) when TMZ caught up with him.

When asked whether we would see him playing football next year, Manziel confidently responded, “Of course.” Manziel also gave a shout-out to his mom as well as his alma mater, Texas A&M.

I doubt Johnny Football comes back from this ⚡️ “What’s next for Johnny Manziel?”https://t.co/W22SqJzuxt

Teams in need of a starting quarterback … have yet to be even rumored to be kicking the tires on Manziel.

What happens next is anyone’s business, although teams in need of a starting quarterback—namely the Broncos and Jets—have yet to be even rumored to be kicking the tires on Manziel, who was Cleveland’s first-round pick just two years ago.

At the very least it would seem that Manziel’s best shot at playing in the NFL again is to become a backup in hopes that a starting job could eventually become available. Even at that though, his constant off-the-field behavior as a backup might be too much for most teams to handle.

Manziel has been in the spotlight ever since the Browns used the 22nd overall pick on him in the 2014 NFL Draft.

The gifted quarterback was pictured partying in Las Vegas on Memorial Day weekend just weeks after that draft. A couple weeks later he was pictured floating around a pool bar on an inflatable swan with a champagne bottle in his hand.

What’s next for Johnny Manziel? He needs to take care of himself first: https://t.co/K9tEdm2TMo pic.twitter.com/Su365l1SFO

A month after that, a photo of Manziel rolling up a $20 bill in a bathroom of a bar went viral. It happened just a week after he was reportedly partying it up with Justin Bieber and Floyd Mayweather at Bieber’s house on a night (actually early morning) where the police had to be called to the residence.

Then in November 2014, police were called to an incident in Manziel’s downtown home (The 9 at the Metropolitan) after the star quarterback was accused of punching a drunken fan who was allegedly seeking a hug.

At the time, Manziel was not performing well on the field. The former Aggie star started two games his whole rookie season and his final 2014 statistics were dreadful—18/35 passing for 175 yards and two interceptions. Good for a quarterback rating of 42.0.

After the season, Manziel checked himself into rehab (for 73 days) and looked much-improved on the field in his second season in the NFL—eventually becoming Cleveland’s starter. But after reportedly promising coaches he would be good over the bye week, a video surfaced of Manziel partying it up again and he was demoted from starter to third-string quarterback.

In late February of this year, Manziel was allegedly seen drinking champagne at a STORY nightclub in Miami, just hours after officials announced his domestic violence case was headed to a grand jury (per USA Today’s Eric Prisbell). Finally, last Friday Manziel was released by the Browns.