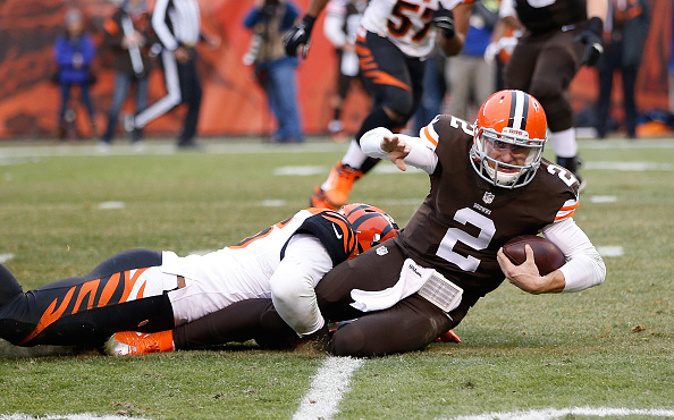 CLEVELAND, OH - DECEMBER 14: Johnny Manziel #2 of the Cleveland Browns gets tackled by Chris Carter #56 of the Cincinnati Bengals during the second quarter at FirstEnergy Stadium on December 14, 2014 in Cleveland, Ohio. (Photo by Joe Robbins/Getty Images)
NFL

Johnny Manziel has not been impressive in his first NFL start thus far, despite the fact Lebron James is attending the game. Thus far, the Browns have not scored, and Johnny’s stats are disgustingly bad: 5/11 for 28 yards, and two interceptions at the 9:14 mark in the 3rd quarter. Johnny hasn’t gotten anything going on the ground either, rushing four times for just three yards. So you can’t blame stuff like this for trending.

“@HuskerGrip: Johnny Interception has to be one of my favorite twitter trends ever”

“Johnny Interception” and “Put Hoyer” are both trending right now…

Johnny INTERCEPTION! you gotta value the ball in any sport! #CARELESS

The Internet can be a cruel place… ‘Johnny Interception’ is trending pic.twitter.com/mnQrbBB4ho

The internet is indeed a cruel place…Good luck the rest of the game Johnny.