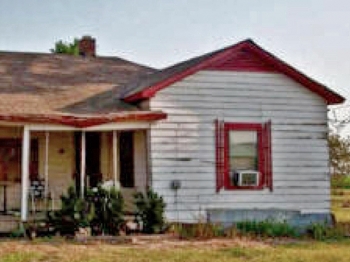 American singer and actor Johnny Cash will be honored by his home state. He was born in Dyess, Ark. and the house that built him will become a museum.

The family home has been bought by the Arkansas State University, which will make it into a museum with money raised by the first Johnny Cash Music Festival to be held on Aug. 4.

By establishing the Johnny Cash Boyhood Museum, the university is hoping to make the location an international tourism designation.

Already, even though there is nothing open to the public and no interpretation, tourists are coming to this town in great numbers,” the university said in a release. “Bus tours in the past year have included groups from places such as Ireland and Finland.”

Cash, who was born in 1932 and died at age 71 in 2003, was one of the most influential country and rock ‘n’ roll musicians of the 20th century. He was known for his unique, deep bass-baritone voice, and his dark performance clothing, which led to his nickname the “Man in Black.”

The Cash family was among the five colonist families recruited in 1934 from Cleveland County in Arkansas to the historic Dyess Colony, the nation’s first agricultural resettlement community under the Works Progress Administration and the Federal Emergency Relief Administration, two of the largest New Deal operations.

Cash, who had lived in Dyess until he graduated from high school in 1950, wrote many songs that were greatly influenced by his experiences in Dyess, including “Pickin’ Time” and “Five Feet High and Rising.”

Cash’s home, which the university wants to make into a heritage site that represents the Dyess Colony, is being compared to Graceland, Elvis Presley’s well known home in Memphis, Tenn., which was turned into a museum after the “King of Rock ‘n’ Roll” died.

Cash’s friends, family members, and peers are scheduled to perform at the festival, including his eldest daughter, Roseanne; his brother, Tommy; and his son; John Carter Cash.

"Johnny made a great impact on music and was known worldwide," said Bill Carter of Nashville, the main festival founder and promoter, at a press conference, according to the Northeast Arkansas Town Crier. "He had an impact on all those he touched. There are so many people who are willing to contribute their time and talents to this festival, and the people of Dyess, and our whole area will benefit from it."

With the festival taking place on Aug. 4, Arkansas Gov. Mike Beebe has designated the day as Johnny Cash Day in the state.

The music festival will take place at 7:30 p.m. on Aug. 4 at ASU’s Convocation Center. For tickets and other information, please visit www.johnnycashmusicfest.com.