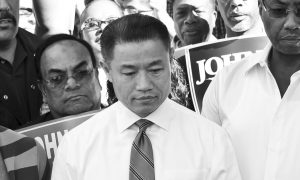 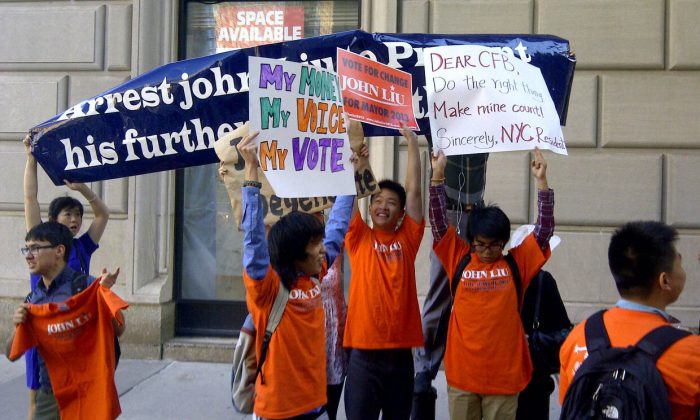 Supporters and protestors of City Comptroller and mayoral candidate John Liu outside the Campaign Finance Board in Manhattan on August 5. Student volunteers for John Liu’s mayoral campaign actively blocked the signs of those who believe Liu should be arrested in light of the conviction of Liu’s aides for attempted campaign finance fraud. (Joshua Philipp/Epoch Times)
John Liu Unmasked

NEW YORK—The Campaign Finance Board announced on August 5 that comptroller and mayoral candidate John Liu will not receive public matching funds. The decision comes after two of his aides were found guilty in federal court on May 2 for attempting to defraud New York City by illegally funneling cash into Liu’s campaign to get public matching funds.

A large crowd of both Liu’s supporters, and those supporting the CFB decision, stood outside the Campaign Finance Board (CFB) on Rector Street where the decision was handed down. Some people held signs calling for Liu’s arrest in light of the scandal, while others were for Liu’s mayoral campaign.

The protests began around 9 a.m. and were rather chaotic until police arrived around 10:00 a.m.

There was a large crowd of students wearing orange shirts for Liu’s campaign. One of the organizers who did not give her name, and who was passing out stickers, said they were in-office volunteers for Liu’s mayoral campaign.

Liu’s supporters surrounded the people protesting against Liu. Some slapped John Liu stickers on the signs of protesters against John Liu.

Groups of Liu’s supporters held up signs, trying to block the signs against Liu. Some of the students held up signs, jumping up and down, as they blocked a banner calling for the arrest of John Liu.

“Block that sign!” shouted one of Liu’s 19-year-old supporters who declined to give his name.
“Yeah, block that sign,” he said, as he held a sign in front of one against Liu.

When asked about his actions, he said, “I’m not blocking, I’m holding in front of their sign. I’m holding a sign up in the air, it’s gonna block something.”

After a while, people whose signs were blocked tried stepping out from behind the people who were blocking them, and shuffling bouts ensued of people trying to block and unblock signs.

The protests against Liu were organized by Liu Guohua, Chinese democracy activist and co-founder of Guards of American Values.

Liu Guohua spoke with a television reporter as one of Liu’s supporters stood behind him, heckling him, as two other Liu supporters laughed.

Liu Guohua told Epoch Times he and others came to protest against Liu and to support the decision by the CFB to deny matching funds for Liu’s campaign.

“John Liu is the benefactor of the crimes committed by his two major aides. He should be responsible because he benefited from their crimes,” he said.