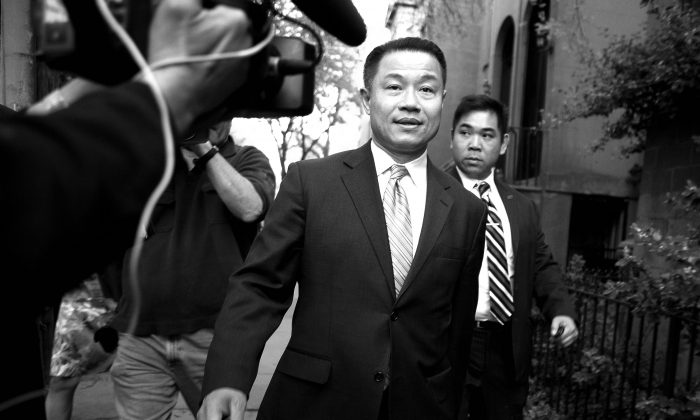 New York City Comptroller John Liu leaves a press conference in Brooklyn, New York, May 2, 2013 after two of his aides were found guilty of attempted wire fraud in conjunction with his comptroller campaign from 2009–2011. Liu is also a NYC mayoral candidate. (Samira Bouaou/Epoch Times)
New York

Bloomberg and the Department of Homeless Services filed the lawsuit after Liu rejecting contracts to establish two homeless shelters—one in the Bronx, and a second in Manhattan.

“We are going to defend against this lawsuit because this is a contract that should not be moved forward,” Liu said at an unrelated press conference July 22.

Bloomberg’s office says Liu does not have legal grounds to reject the contract, under the New York City Charter. Liu has claimed the contract did not specify the number of people who would be serviced by the homeless shelters.

“The Comptroller’s refusal to register contracts that provide vital services to homeless families is an illegal and willful violation of his duties,” Andrea Feller, lead attorney at the NYC Law Department, said in a statement.

Bloomberg has criticized Liu in the past for playing politics, claiming that Liu has a pattern of calling press conferences to reject contracts for minor technical problems, then quietly passing the contracts with minor changes.

In this case, analysis of the actual contracts show that contrary to Liu’s claims, the specific number of people who will be housed by the homeless shelters is listed. The numbers are on page 16 of both contract packages. The Bronx shelter is expected to house 101 families with children, the Manhattan shelter 200 families.

“It’s a joke,” Marc La Vorgna, Bloomberg’s press secretary, told New York Times. “Sad part is this is taxpayer resources and dollars being completely wasted on naked political ambitions. He was running for mayor the second he stepped into this job and had no interest in doing the job he was sworn in to do, only to abuse the position.”

A June 2006 court case between Bloomberg and then-Comptroller Bill Thompson offers a precedent. According to a court document, Chief Judge Kaye stated that that the mayor, “not the Comptroller,” has the burden to determine whether “requirements have been met,” and whether the contracts are within legal boundaries.

Michele Ovesey, Department of Homeless Services commissioner, said in a statement, “The Comptroller’s willingness to play politics with the lives of families and children is reckless and irresponsible.”

At a press conference on July 22 unrelated to the lawsuit, Liu said “If anybody is playing politics here, it’s Mayor Bloomberg with his silly lawsuit.”

Liu estimates that between 15,000 and 20,000 contracts pass through his office each year. He said he has instructed his analysts to go through every one of them, because “we have seen too many problems with the Bloomberg administration’s contracts in previous years.”

“I have elevated the contract analysis function in my office,” he said, claiming that corruption is “a possibility in every contract.”

Two of Liu’s aides were found guilty of attempted wire fraud in May in connection with a straw donor scam attempting to fraudulently secure matching funds from the city for his comptroller campaign from 2009–2011. Liu has not been charged in connection with the campaign finance fraud, and maintains he was unaware of what was happening in his office.