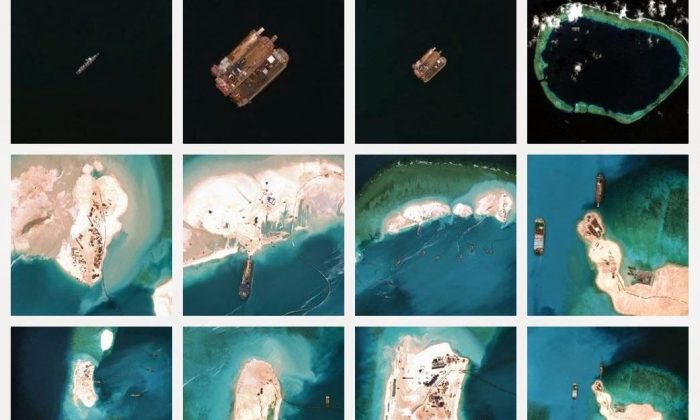 Images of China’s land reclamation activities on Mischief Reef in the Spratly Islands, as of early 2015. The United States has warned that it would not respect the claims to sovereignty and territorial waters that China expects the islands to assert. (Screenshot via Asia Maritime Transparency Initiative)
China

When Secretary of State John Kerry visited China and met with top officials there recently, he had a key message to deliver: that the Chinese regime should cease pursuing its territorial claims in the South China Sea by force of arms.

But the Chinese public would hardly have found out about this, given that it hardly made it through to news reports inside China.

Kerry’s visit, from May 16 to 17, saw him meet with Party leader Xi Jinping, foreign minister Wang Yi, and a clutch of other top officials, including Vice Chair of the Central Military Commission Fan Changlong.

In the days leading up to his trip, The Associated Press reported the remarks of a senior State Department official that appeared to lay out Kerry’s diplomatic agenda while in Beijing.

According to AP, citing the official source, Kerry was going to “reinforce … the very negative consequences to China’s image and China’s relationship with its neighbors on regional stability and potentially on the U.S.–China relationship from their large-scale reclamation efforts and the behavior generally in the South China Sea.”

Kerry intended to leave China “in absolutely no doubt” about America’s commitment to freedom of navigation, a principle the Chinese regime is openly challenging with its island-building activities in the South China Sea over the past year.

China has dredged thousands of metric tons of sand and rock over semi-submerged reefs, building islands with runways, harbors, and troop facilities. The chain of island fortresses is being used to push territorial claims in the South China Sea and ultimately prevent vessels from other countries from sailing through those waters.

One of the United States’ proposed responses to these activities is to send ships within 12 nautical miles of the structures in the Spratly Islands, which lie in the waters between Vietnam and the Philippines, ignoring China’s claim that the islands have territorial status. Chinese official and semi-official media sources have recently warned against any such maneuver, saying it would meet with a stiff response.

But no expression of American resolve to defend freedom of navigation made it through the Chinese news reports that covered Kerry’s visit.

Global Times, a nationalist cheerleader newspaper operated by People’s Daily, the Party mouthpiece, published a headline saying “Kerry Didn’t ‘Pressure China,’ As Everyone Fussed About.” The article said that “there’s no possibility that a high-level American official will come to China and unilaterally put on a hard stance.” Instead, Kerry’s trip to China was “business as usual,” and there was “nothing for the media to beat up,” according to Global Times.

In an English-language report on the meetings between Kerry and Chinese officials, the American position was provided in two lines: “Kerry reaffirmed the U.S. government’s stance of not taking sides on the South China Sea issue and said the same stance will apply to other parties involved in the dispute … Kerry said recent media reports on the South China Sea issue do not reflect any political decision by the U.S. government.”