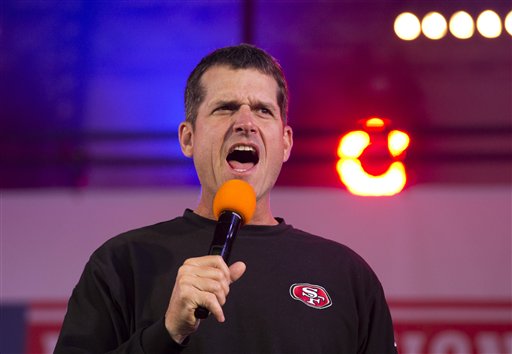 San Francisco 49ers head coach Jim Harbaugh shouts to the fans as he is interviewed on stage during an NFL fan rally in Trafalgar Square, London, Saturday, Oct. 26, 2013. The San Francisco 49ers are due to play the the Jacksonville Jaguars at Wembley stadium in London on Sunday, Oct. 27 in a regular season NFL game. (AP Photo/Matt Dunham)
NFL

Jim Harbaugh said rumors about him taking the University of Texas coaching job were laughable. About the rumors, Harbaugh said, “Are you trying to be funny?”

Harbaugh, who coached the San Francisco 49ers to the Super Bowl last year, added, “I don’t ever talk about any job other than the one I have,” reported the San Jose Mercury News.

Harbaugh is currently in his third year of a $25 million contract as the head coach of the 49ers.

Another report said that when USC called, Harbaugh “flat-out rejected” their offer after coach Lane Kiffin was fired this season.

Rumors have said that Texas coach Mack Brown might be on his way out, but there has been no official confirmation.

Brown addressed the reports this week, saying nothing has changed.

“There’s been a little speculation about my job situation,” Brown told ESPN. “We’re not here to talk about me. My situation has not changed. I have the best president in the country in Bill Powers. He’s done a tremendous job. We’ve lost an iconic athletic director in DeLoss Dodds. He’s been my boss for 16 years. We hired what I think is a great athletic director in Steve Patterson.”

He added: “Any time the athletic director changes, it changes the game. I will sit down and talk to him and Bill and discuss the direction we’re going. I’m looking forward to my meeting with Bill and Steve and then move forward.”