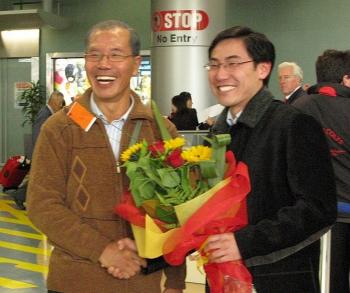 FATHER AND SON: Jia Jia (left) and his son Jia Juo at the New Zealand airport in 2007 when Jia Jia arrived after defecting from the Chinese Communist Party. (The Epoch Times)
International

By Charlotte Cuthbertson
Print
Democracy advocate and high-profile Chinese defector Jia Jia flew into Beijing on Oct. 22, only to be immediately detained.

“We spoke to him just after he was detained at the airport and Jia Jia asked us to keep calling him, but since then there has been no response from his cell phone,” New Zealand human rights lawyer Kerry Gore said. “No one knows where he is at the moment.”

Jia Jia, the former general secretary of the Shanxi Provincial Association of Scientists and Technology Experts, is a United Nations refugee with New Zealand permanent residency. He publicly split from the Chinese Communist Party in 2006 while on a trip to Taiwan.

His son, Jia Kuo, remains in New Zealand. Jia Kuo said that at the airport he felt like convincing his father to stay, knowing he would likely be subject to danger. But, he said he thought of his father’s will, and of the people of mainland China, and decided to support his father unconditionally.

Jia Jia’s flight back to China was scheduled three years after leaving. In the past three years he has been a fierce advocate for freedom for the Chinese people. After publicly declaring his renunciation from the CCP in Taiwan, Jia Jia has actively supported Chinese people doing the same. Jia Jia is the vice president of the China Interim Government, which was formed in the beginning of 2008.

In a letter he left behind in New Zealand, Jia Jia states: “In the past three years, I have been at many occasions in many countries calling publicly for all the party members to quit the CCP and establish new parties, and to establish a united democratic states of China. … The root cause of all the problems in China is the Central Committee of the CCP. The only obstacle that keeps China from being a democracy is the Central Committee of the CCP.”

Jia Kuo said his father dared to make the decision to return to China not fearing danger or persecution, "because he loves his mother country, loves his home town, and only for the democratization of the motherland would he shoulder such danger and difficulties."

Meanwhile, Gore said he has contacted the New Zealand Embassy in Beijing, who has, in turn, contacted the Chinese regime—no response has been received thus far.

"As a human rights lawyer I am familiar with the Chinese Communist Party's very poor human rights record and its treatment of those who advocate democracy in China,” Gore said. “I am therefore very concerned for Jia Jia's personal safety.”