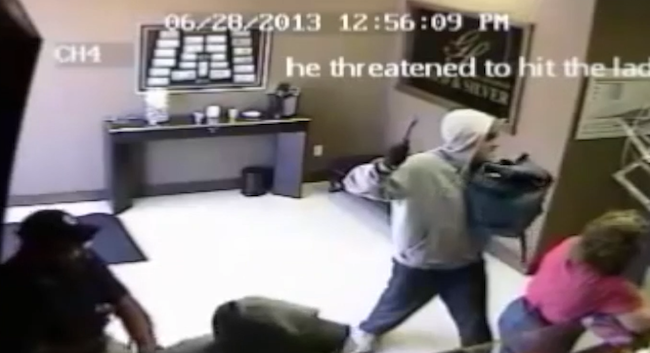 A baseball bat, a stool, and a couple of burly firemen were waiting for some would-be thieves who attempted to rob jewelry store—the Canadian Gold and Silver in northwest Calgary.

Surveillance video shows a pair of young men in hoodies walk into the store with crowbars and start to threaten staff and customers.

But a person behind the counter clocks one of the thieves with a baseball bat, and while his friend tries to drag him out of the store, a customer wielding a stool at the door prevents him from leaving.

Somebody else then takes a swing with the bat, though one of the thieves manages to get away.

The remaining, disoriented thief is then subdued by a passing group of firefighters who pin him to the ground until police could arrive.