Chapter Six: A Country Founded on “Hatred” Is Chaotic Beyond Recognition
0

Chapter Five: The Evil Specter Usurps the Throne of the Divine—Traditional Culture in Ruin
0

Chapter Four: The Specter of Communism is Relentlessly Destroying Humankind
0 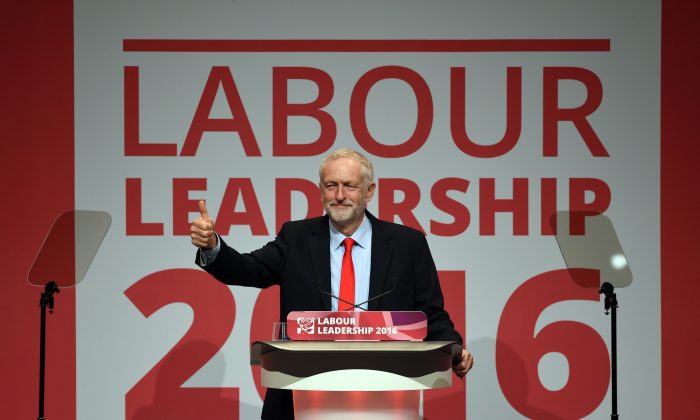 Jeremy Corbyn celebrates his victory following the announcement of the winner in the Labour leadership contest between him and Owen Smith at the ACC Liverpool, England, on Sept, 24, 2016. (Danny Lawson/PA via AP)
Special

Both are political outsiders who have unsettled their parties and energized their large fan bases, but whose ability to win power remains unproven.

To supporters like Carel Buxton, a retired school principal from London, the 67-year-old longtime leftist Corbyn is “authentic.”

“People in this country are sick to death of well-spoken, booted-and-suited slimy politicians,” she said.

But to detractors like John McTernan, a former senior adviser to Prime Minister Tony Blair, Corbyn “is nothing other than a complete and utter disaster for the Labour Party.”

Last year Corbyn, a long-time back-bench lawmaker, was the shock choice of party members to head Labour, which has lost two successive general elections to the Conservatives.

He has strong support among local activists, but many Labour legislators believe his left-wing views are out of step with public opinion, and tried to unseat him.

It didn’t work. After a months-long leadership battle, Corbyn won almost 62 percent of the more than 500,000 votes cast by Labour members and supporters. His challenger, Welsh lawmaker Owen Smith, got 38 percent in a result announced Saturday at the party’s conference in Liverpool, northwest England.

Corbyn’s margin of victory is larger than a year ago, but he heads a party that’s deeply divided about whether it values political principles over gaining power.

Accepting his victory to a standing ovation from delegates, Corbyn pledged to work for unity.

“We have much more in common than that which divides us,” he said. “As far as I’m concerned, let’s wipe that slate clean from today and get on with the work we’ve got to do as a party.”

Like Bernie Sanders, who shares some of Corbyn’s outlook, or Trump—who definitely doesn’t—Corbyn is a sign of how the political center ground has eroded.

Corbyn spent more than 30 years as a Labour lawmaker, never holding a senior role and best known for his frequent rebellions against the center-left party’s leadership. When he ran for leader, few expected him to win. But he was propelled to victory by thousands of new members who joined Labour to back him.

For Corbyn supporters, it was a chance to repudiate the centrist “new Labour” vision of Blair, who won three British elections starting in 1997 but became too cozy with big business for some tastes and took Britain into the unpopular U.S.-led Iraq War.

Labour lost power in 2010 to Conservative-led governments that have overseen years of public spending cuts.

Corbyn harkens back to Labour’s working-class socialist roots with promises to build hundreds of thousands of government-backed homes, raise wages for the poor and taxes for the rich, abolish university tuition fees and get rid of Britain’s nuclear weapons.

Tens of thousands more new members have flocked to Labour since Corbyn was elected, making it Britain’s largest party. He draws big crowds to rallies and meetings, and his supporters are a formidable force on social media.

His followers—dubbed Corbynistas—see Labour as a mass movement for social justice, similar to Spain’s Podemos, rather than simply a machine for winning elections.

“Politics is changing,” said Emma Hamblett, a Labour conference delegate from Romford, near London. “It’s becoming more people-powered (rather) than just the elite at the top. We’re having a voice. It’s generating a lot of excitement, especially among the young.”

But most Labour lawmakers and a chunk of party members despair of ever regaining power while Corbyn is in charge. They argue that his policies are too narrowly left-wing to win over undecided voters. And they fear a return to Labour’s civil war of the 1980s, when party leaders battled to eject hard-left factions and some members split to form the Social Democratic Party.

Although he enthuses crowds at rallies, Corbyn is a lackluster performer in Parliament. He gave only muted support to the European Union during this year’s referendum campaign on whether Britain should leave the 28-nation bloc, a factor some think contributed to the “leave” victory that will change the country’s future forever.

There’s also frustration among Corbyn’s opponents that he is not providing strong political opposition at an uncertain time, as Britain negotiates its exit from the EU.

After the June 23 EU referendum, more than 170 of Labour’s 230 MPs declared no-confidence in Corbyn, but he refused to resign, sparking a leadership challenge from the little-known Smith. The contest was nasty, fraught with online name-calling and allegations that the leadership of the strongly pro-Palestinian Corbyn has fostered anti-Semitic abuse in the party.

Corbyn called Saturday for an end to “intimidation and abuse.”

Despite the calls for unity, Labour members continue to trade blame for the party’s woes. Pro- and anti-Corbyn forces are tussling for control of the party executive and battling over who chooses the members of Labour’s top team in Parliament.

Lawmaker Diane Abbott, a Corbyn ally, urged dissenting lawmakers to “settle down and unite behind the leader.”

“This country needs a sensible progressive party, and it will get one back,” he said. “It’s just a question of time.”