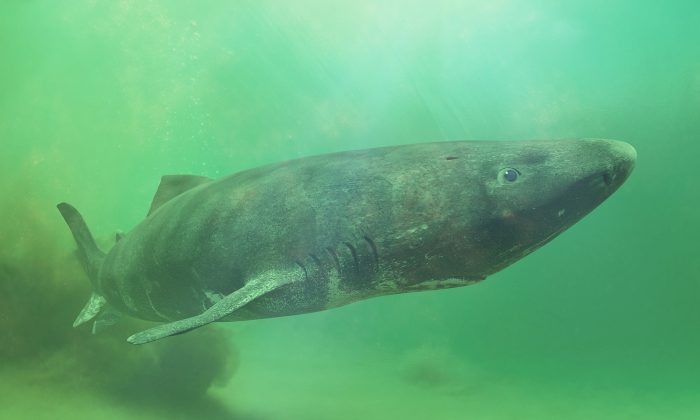 A stock photo of a shark (Illustration - Shutterstock)
US News

A truly massive shark was spotted off the coast of Martha’s Vineyard, Massachusetts, according to recent video footage.

A clip posted to Twitter shows a shark that is at least 20 feet in length.

It’s not clear what kind of shark it is, but according to the person who posted it, “Jaws does exist.”

Other details about the video, including when it was taken, are not clear.

One user wrote that it is a basking shark as the dorsal fin is sticking straight up, whereas great white sharks have a 45-degree angle fin.

Basking sharks are the second-largest shark in the world next to whale sharks. And like whale sharks and megamouth sharks, they eat plankton.

“The most impressive feature of the basking shark is its mouth, which opens up to 1 meter wide. It has a conical body covered with a layer of mucus, gray or brown skin on the back and white on the belly. Its dorsal and pectoral fins are so large that they can reach 2 meters each and its tail is crescent moon shaped,” says Sharks World.

The site adds: “It has a conical snout and large gills. Inside its mouth, this shark has several hook-shaped small teeth. Its liver is about 25 percent of its total body weight and is rich in squalene, a substance that helps the shark to float.”

The moniker “basking” came to be as the shark spends a while feeding under the sun, the website noted.

“Like the whale shark and the megamouth shark, the basking shark mainly feeds on plankton, so it is not a common predator. But unlike the other two species, it does not seem to actively seek for food or use the muscles of its head to suck water, instead, it usually swims with its mouth open and catches whatever it goes through. When the water passes through its gills, the spines of the gills rakers separate the plankton from the water. The shark closes the mouth and then pumps the water out through the gills,” the site notes.

Researchers tracking a 10-foot, 800-pound shark off the eastern coast of the United States have announced the massive creature has made its presence known just 15 miles off the coast of Cape Cod by way of a “ping.”

The shark—a great white dubbed Miss May—”pinged in” at 4:58 a.m. on July 9, according to an update on the OCEARCH website, an ocean research organization that tracks sharks.

A “ping” happens when a tagged shark’s dorsal fin breaks the surface of the water and transmits a signal, which is noted down for tracking purposes.