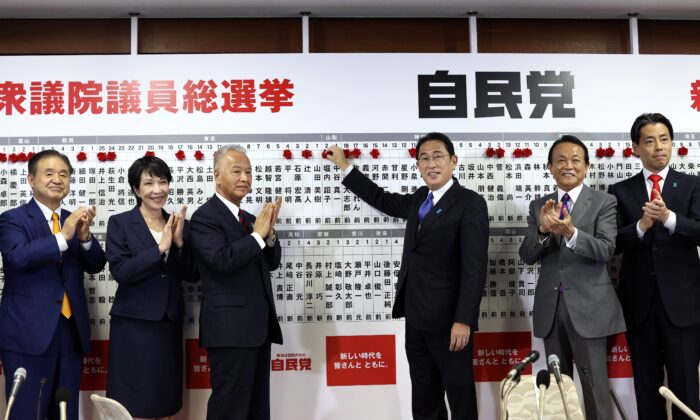 Steady as it goes ... but not very fast

Japan held its election for the Diet Lower House (think: U.S. House of Representatives) on Oct. 31. Japanese elections rarely result in drastic change—and this one didn’t, either.

What happened? The ruling Liberal Democratic Party (LDP) lost some seats, but retained a majority—even without Komeito, its coalition partner’s seats added in.

Since its founding in 1955, the LDP has governed Japan almost without interruption, except for two brief periods—in 1993-1994 and 2009-2012—when left-leaning opposition parties prevailed.

Foreign reporters and observers often describe the LDP as a “conservative” party—perhaps because it generally supports the U.S.-Japan alliance. But “conservative” doesn’t quite capture the LDP. The party’s left wing includes politicians who are curiously (and dangerously) soft on China and uninterested in a stronger defense. Meanwhile, the LDP’s right wing calls for a tough stance on China and bulking up national defense. And there’s everything in between.

Typifying the difficulty of categorizing the party is the long-ago (but still relevant) case of LDP powerbroker, Shin Kanemaru. A longtime supporter of the U.S.-Japan alliance, Kanemaru resigned from his Diet seat in 1992 after a financial scandal that saw prosecutors hauling large piles of money, bearer bonds, and gold bars from his office. The gold bars were reportedly traced to North Korea.

The LDP’s coalition partner, Komeito, makes a strange bedfellow. It got tired of being irrelevant some years back, so Komeito linked up with the LDP—even though its top leaders were (and still are) regarded as pro-China and anti-military. However, Komeito is a reliable voting bloc, as its voters mostly come from the Soka Gakkai religious organization. And the relationship still holds, even though the LDP has had majorities in its own right for the last several years.

The Komeito partnership does tend to dampen the LDP’s ability to push through initiatives that would strengthen defense policy in particular.

As for the main opposition, the “left-leaning” (another tricky characterization) Constitutional Democratic Party of Japan (CDPJ) mostly supports (or at least doesn’t really object to) the U.S.-Japan alliance. It didn’t do very well in the election and lost 14 seats. That is probably because it aligned with the Japan Communist Party (JCP) for this election, which does oppose the alliance, and is, after all, communist.

The Communists are not exactly a huge or popular force in Japan these days, with just a dozen representatives in the 465-member Diet Lower House before the election, and only 10 afterwards. And most JCP members would be shocked to meet a real communist—and even more shocked to have to govern—as would the CDPJ.

Perhaps the biggest election surprise was the conservative (by and large) opposition party Ishin (Japan Innovation Party), which nearly quadrupled its seats (41) and is now larger Diet seat-wise than the LDP’s coalition partner, Komeito.

Japanese politics are as complex and vicious as politics in any democratic society—and following the minutiae takes some effort.

Now that the LDP has retained power, even if by a slightly diminished margin, the issues that many foreign observers are watching are the Kishida administration’s stance on key defense and foreign policy issues, including: the U.S.-Japan alliance, Japan’s overall national defense strategy, policy toward China, and stance on Taiwan.

Before becoming prime minister, Kishida was regarded as relatively weak on both defense and on China. But during the campaign for LDP party leadership (and the prime ministership) a few months ago, he shifted to a more overtly pro-military and tough on China platform.

So what’s likely to happen? The U.S.-Japan alliance—and its military component—will stay intact. There is broad political and public support for it, especially given the increasingly dangerous neighborhood and the increasingly overt Chinese (and North Korean) threats.

As for Japan’s overall defense capabilities, the LDP platform calls for doubling defense spending. But it gives no details of “by when” or what the extra money will be spent on. There is also talk of long-range missiles (“strike capabilities”) to destroy enemy missile sites, and building hypersonic weapons, advanced stealth fighters, and the like. But once again, details and timelines remain vague. Kishida is unlikely to push for revising the defense-related elements of the Constitution, which was a prime objective of former Prime Minister Shinzo Abe.

As for China, Kishida (and some of his close advisers) understand the risks—as does much of the LDP and most of the public. The administration is talking tough and criticizing Beijing’s behavior, while publicly stating that Taiwan’s defense is crucial for Japan. And Kishida has appointed an economic security minister to reduce dependency on Chinese supply chains, address intellectual property theft, curb the vulnerability of Japanese investment in China, and manage the threat from Chinese inward investment in Japan.

Regarding Taiwan, LDP conservatives—like the unsuccessful prime ministerial candidate Sanae Takaichi, who is now LDP policy head—want a Japanese version of the U.S.-Taiwan Relations Act, and more direct interaction and support for Taiwan.

But here comes the hard part—implementing these ideas.

Besides the “regular” opposition and the uncertain cooperation of the newly powerful Ishin bloc, Kishida will face resistance from the “other end” of the LDP itself as he tries to strengthen defense, get tougher on China, and help Taiwan. He will also need to placate his Komeito partners to ensure cooperation on other, especially domestic, matters—even though the LDP has a majority of seats by itself.

And the Japanese bureaucracy—with its outsized policymaking power—can also slow-roll or sabotage an administration’s efforts.

This all tends to water down what an administration can accomplish. So things will move at “Japan speed.” Fast enough by Tokyo standards, but not as fast as the American allies will prefer—nor fast enough to match the growing capabilities and threats posed by the Chinese People’s Liberation Army. Even North Korea’s missile and nuclear capabilities are dangerous enough, but that won’t speed things up, either.

Will American alliance managers press Japan? Probably not. They never have.

American policymakers, and many Japanese, perhaps got spoiled during Abe’s nearly nine years in office. Abe had some real successes that helped the U.S.-Japan alliance; in particular, revising the U.S.-Japan defense guidelines and pushing through the Diet a reinterpretation of “collective self-defense.” In theory, these allow Japan to more easily support U.S. forces operating to defend Japan. Abe also squeezed a little more money for defense out of the Ministry of Finance, and tried, though unsuccessfully, to revise the Constitution to formally recognized the role of the Japan Self-Defense Force.

Abe had the time to push these initiatives.

However, he was followed by Yoshihide Suga’s short-lived administration. And one suspects Japan has returned to the tradition of short-serving prime ministers, who hear the swords sharpening after they’ve been in office a year or two, and have stumbled a bit.

That makes it hard to devote the sustained attention and effort needed to push through policy changes in Japan. So while Kishida has the right ideas, turning them into something concrete—and fast enough—will be a challenge.

Ironically, Kishida might have more success if he appeals directly to the citizenry. Why so? The Japanese public (which still reads newspapers or follows the news) often seems to have a better understanding of Japan’s foreign and defense policy requirements than many politicians and officials.

Soon we will know if they will permeate the new government as well—or at least enough to move things beyond “Japan speed.”