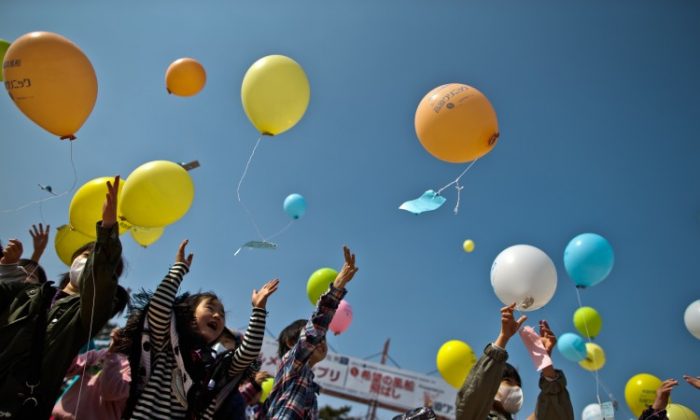 Children float balloons during the second anniversary commemoration of the earthquake and tsunami on March 10, 2013, in Minamisoma, Japan. (Athit Perawongmetha/Getty Images)
US

Children released balloons to pay their respects to victims of the Fukushima disaster during the second anniversary commemoration on March 10 in Minamisoma, Japan.

At least 19,000 people died in the earthquake, tsunami, and subsequent nuclear accident in Fukushima, Japan. The disaster started March 11, 2011. It was the worst nuclear accident since the Chernobyl meltdown in Ukraine on April 26, 1986.

Environmental group Greenpeace sponsored a global day of action. Protesters assembled at the Japanese parliament and planted cherry trees at nuclear plants around the world. Greenpeace reported that tens of thousands of protesters assembled at the Japanese parliament to ask for greater compensation for nuclear accident victims and for restrictions on nuclear plants.

“We cannot stop natural disasters, but we can prevent man-made ones,” wrote Junichi Sato of Greenpeace Japan on the Greenpeace news blog.

“We cannot give the people of Fukushima back what they have lost,” he added, “but we can stand together and ensure they get compensated, that they are remembered, and that no one has to suffer through a nuclear meltdown ever again.”

The American government sent Operation Tomodachi, the government’s single largest bilateral military operation with Japan, to Japan after the disaster, according to President Barack Obama. The Department of Defense sent 24,000 personnel, 190 aircraft, and 24 Navy ships to support humanitarian assistance and disaster relief efforts.

“We continue to be inspired by the Japanese people, who faced unimaginable loss with extraordinary fortitude,” wrote the president in a March 2012 statement for the first anniversary of the disaster. “Their resilience and determination to rebuild stronger than before is an example for us all.”