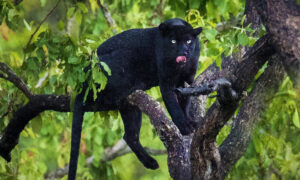 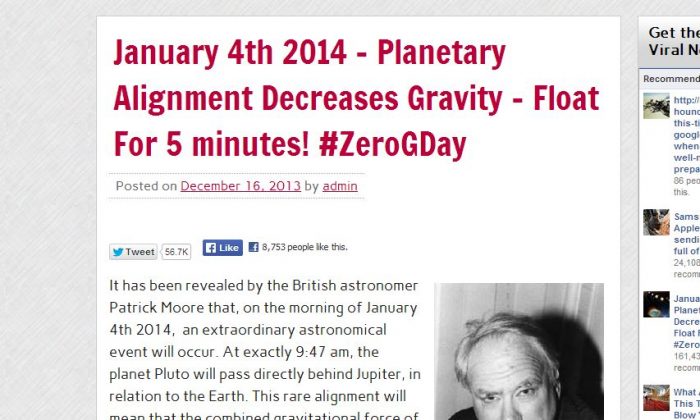 A screenshot of the News-Hound.net blog shows the fake report.
Science

A rumor from the News-Hound.net blog is claiming there’s a “zero-G day” at 9:47 a.m. on January 4, 2014, that will decrease gravity allowing people to float for five minutes due to an “extraordinary astronomical event.” But it’s not real as it was a hoax perpetrated by astronomer Sir Patrick Moore four decades ago.

“At exactly 9:47 am, the planet Pluto will pass directly behind Jupiter, in relation to the Earth. This rare alignment will mean that the combined gravitational force of the two planets would exert a stronger tidal pull, temporarily counteracting the Earth’s own gravity and making people weigh less. Moore calls this the Jovian-Plutonian Gravitational Effect,” reads the blog that has hundreds of thousands of “likes” and shares on Facebook, saying that the “theory” was attributed to astronomer Sir Patrick Moore.

However, the whole thing was a hoax created several decades ago by Moore but websites and blogs kept passing it along every year, saying it will happen a few days after New Year’s Day.

Moore, who was the BBC Radio 2 astronomer, said the event would happen as part of an April Fools Day prank in 1976.

“Moore told listeners to jump at exactly that time to experience the once-in-a-lifetime effect. At 9:48, callers flooded the lines, eager to describe how they had briefly floated. News that Moore had played them no doubt brought everyone crashing back to earth,” reads a report frome Time magazine two years ago about the prank.

However, the fake News-Hound report got many people believing it’s real.