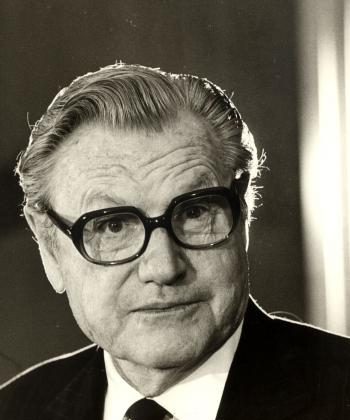 “As governor, Rockefeller's tough stances left a mixed legacy,” writes historian Eileen K. Cheng in The Encyclopedia of New York City. Rockefeller is remembered for his severe drug laws: sale or possession of drugs brought with it a mandatory prison sentence.

The liberal Republican served as vice president under Gerald R. Ford from 1974 to 1977. He got his start in politics through his investment in Creole Petroleum, the Venezuelan subsidiary of Standard Oil. His relations with South America earned him the post as coordinator of Inter-American Affairs in 1940.

Rockefeller was the grandson of John D. Rockefeller, who developed the Rockefeller Center. The center was originally conceived as a the site of three office buildings and a new Metropolitan Opera House. The Great Depression hit, however, and the opera could not afford to move. The site became a solely commercial venue instead.

Nelson A. Rockefeller took over presidency of the center in 1938. A great patron of the arts, he founded the Museum of Primitive Art. He also established the MTA. Rockefeller retired two years before he died of a heart attack.

On Jan. 26, 1934, The Apollo Theater in Harlem, previously catering to an all-white audience, reopened as an African-American-oriented theater. Sydney S. Cohen and Morris Sussman had purchased the Apollo in 1932 and effected the change.

The theater fostered the budding careers of many renowned artists: James Brown, Dionne Warwick, and Pearl Bailey to name a few. The theater remained a center of African-American culture in the city for decades.

In the early days, it featured comedy acts in blackface, a mode of theater that perpetuated racial stereotypes across the world.