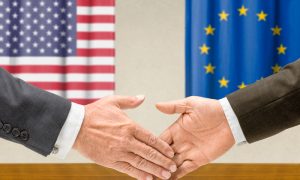 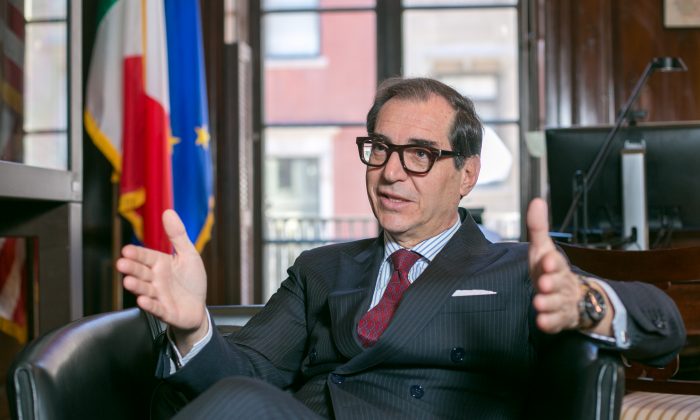 NEW YORK—Everybody agrees Italians are creative when it comes to designing, producing, and marketing high quality products. What many people don’t know is that these principles expand far beyond fashion and food.

“This is the great quality of our entrepreneurs. They go to sleep, they think, and they dream about something. And in the morning they are able to translate a dream into a product. It’s what Schumpeter calls spirit of the entrepreneur: It’s really lively in Italians,” said Pier Paolo Celeste, the Italian trade commissioner in New York.

He spent his life promoting Italian products in the United States and abroad and finds many people still don’t know Italy is a leading manufacturing economy when it comes to high tech.

“Fashion, shoes, Italy. Everyone will agree the food is one of the best. But not everyone knows that Italy is much more than this,” said Celeste, who started his assignment as trade commissioner in 2013.

We have to get rid of the prejudice that Italians don’t like to work.
— Pier Paolo Celeste, trade commissioner, Italy

According to Celeste, roughly one-third of the Boeing 737 Dreamliner is produced in Puglia, Italy. “Not the batteries, they are Japanese,” he said.

Apart from aerospace, he said Italian companies are especially strong in textile, woodworking, and packaging machinery.

“It’s less visible compared to the ones shown in the beautiful magazines around the world. They are of great importance in this American market.”

Case in point: All big American tobacco companies like R.J. Reynolds use the packaging machinery from G.D. Spa., the world leader in this segment from Bologna in Northern Italy. The private company reported revenues of $758 million in 2013 and employed over 2,500 people.

Risks of TTIP for Food ‘Made in Italy’

According to Celeste, it’s not only the product itself—which is important—but also the after sales service, which has reached a very high level for this kind of machinery.

Behind these established leaders, however, there is a new foray of high tech companies pushing forward with innovation.

YouBionic, for example has already produced a prototype hand prosthetic that reacts to electronic impulses, similar to the ones in the human body. And the whole thing can be 3-D printed rather easily.

In order to successfully market these products, Italian trade promotion in the United States has moved past a simple distribution model.

“You increase trade by making marriages between companies. This is what we want to do. We want to find win-win situations,” said Celeste.

He said Italian companies provide the product and the American distributors do everything they can to make it a success in the United States.

“Today the distributors are more brand ambassadors. They want to choose the company. And then become the voice and the eyes of the Italian company on the market,” he said.

If the distributors do it correctly, they are able to sell the story of the company and the product, rather than only the product itself.

“That’s the beauty about Italian products, there is a lot of history behind companies. The passage from generation to generation. It’s a little bit like when you go to a museum and you see a painting from a painter who has grown in his life,” he said. “You can’t compare an Italian T-shirt to a Chinese T-shirt,” he added.

Despite their pedigree, Italian companies also need to adapt to the United States, which imported $42 billion worth of Italian goods in 2014, the second largest market behind European countries such as Germany and France.

“Everybody thinks that the product created in Italy is the perfect one. Sometimes you need an adaptation to the market,” Celeste said. The good news is that changing things around is rather easy for Italians to do: “Flexibility is in the Italian entrepreneur’s DNA,” he said.

However, in order to increase trade even further, Celeste would like to see the Trans Atlantic Trade and Investment Partnership (TTIP) between Europe and America succeed.

The treaty currently under negotiation would reduce trade tariffs and also remove regulation, which can be especially costly for smaller companies.

“The costs vary from $1,600 to $16,000 per product. This is the difference between a competitive and a not competitive product. It can really kick out a good company from the market,” he said.

Despite some concerns in Europe that the relaxation of regulatory rules would result in lower quality products, Celeste thinks there is an upside for everyone in the TTIP.

“We should explain to normal people not only what the difficulties will be but also what the advantages would be,” Celeste said. He believes more competition will ultimately result in more choice and better quality for the consumer.

After getting rid of tariffs and regulations, there is one more thing Celeste would like to bury once and for all, “We have to get rid of the prejudice that Italians don’t like to work.” Italian success abroad proves him right.