‘It was an elevation,’ Says Executive About Spirituality in Shen Yun 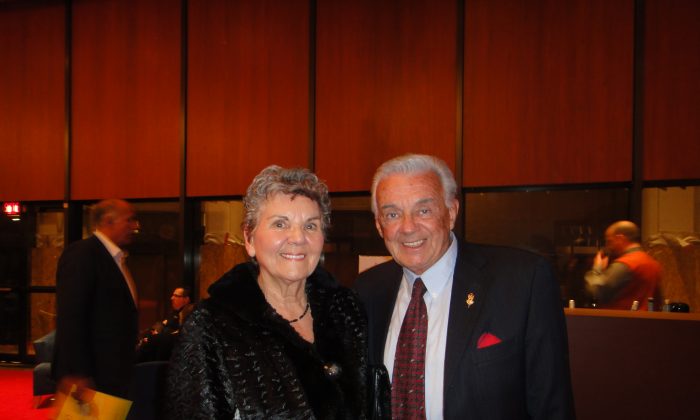 Claude and Denise Dagenais reflected on the importance of spirituality in one’s life after seeing Shen Yun Performing Arts at Place des Arts on May 1, 2016. (Donyu Teng/Epoch Times)

MONTREAL, Canada—Shen Yun Performing Arts wrapped up its three-show run at Place des Arts on May 1, but not without enhancing a spiritual awareness among audience members like Robert Bazinet, who described Shen Yun as “a very touching show.”

Mr. Bazinet, who owns a nanny agency employing about 40 people in and around Montreal, came to see the Sunday matinee presentation of classical Chinese dance and music with his wife, Rachel.

“On a spiritual level, there’s a Buddhist teaching that traverses the show, and I find it’s a peaceful way to denounce repression,” he said.

“I understand that even today in 2016, people can’t express themselves freely in China, [but Shen Yun] can do it here in North America, and I encourage this type of message.”

He was speaking to the fact that Shen Yun can’t be seen in China, since the atheistic communist regime over six decades of rule has suppressed religious expression and nearly eliminated the ancient traditional culture of the country, a heritage rich with noble moral and spiritual ideals.

Meanwhile, it is precisely New York-based Shen Yun’s mission to revive the Middle Kingdom’s 5,000 years of divinely inspired culture, and to share it with the world through the performing arts.

According to Shen Yun’s website, China was once known as “The Divine Land,” where deities and mortals coexisted and where many aspects of human culture were passed down from the heavens, such as fine art, music, and medicine.

Thus the culture has a spiritual essence, embodying principles such as benevolence and justice, propriety and wisdom, respect for the heavens, and divine retribution, ideals originating from Confucianism, Buddhism, and Taoism, which have been at the heart of Chinese civilization for 5,000 years.

Mr. Bazinet could personally identify with this essence grounded in spiritual awareness. He meditates and feels that it is a way to self-examine and let the answers emerge. He believes that the answers to all of our questions lie within ourselves.

“We have to look within ourselves instead of believing with eyes closed,” he said.

“What I saw today confirms what I felt and what I read. It confirms that I’m not the only one who feels this way, and if the majority of Chinese are open to it, I think that we can all hope for a better world in the future.”

Claude and Denise Dagenais, who attended Shen Yun’s evening performance on May 1, are executives at a company that makes automotive care products, products that could also be used in boats and planes. The spirituality in Shen Yun also resonated with the couple, and Mrs. Dagenais, in particular, noted its importance.

“It’s important in life to have spirituality,” she said. “It’s not necessary to have a religion as such; it’s being capable of looking inside yourself to see in your heart, your soul, and to elevate.”

For Shen Yun’s artists, “this spiritual connection is motivation for striving to excel, is the heart behind each movement of the dancer and each note of the musician,” according to the company’s website.

“For me, it was an elevation,” Mrs. Dagenais said about Shen Yun.

“Don’t give up,” he said, encouraging Shen Yun in its efforts to uphold its mission. “We should see this show at least once a year,” he added.