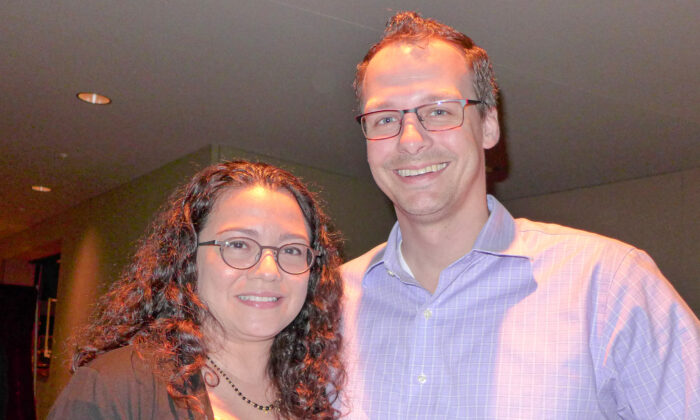 VENICE, Fla.—For five thousand years, Chinese civilization thrived on divinely-inspired beliefs and cultural practices that led to inventions and innovations that made it a mystical, artistic, and technological powerhouse. But then, it was almost lost to the ravages of an authoritarian regime. Today, Shen Yun Performing Arts is breathing new life into the beauty and artistry of traditional Chinese culture, a fact that Florida theatergoers Kevin Wright and Cathy Bernal are grateful for.

“I really like the colors and the acrobatics,” said Wright, who works as a director in the field of information technology. “The combination of everything is beautiful. The music is really well put together. The choreography is amazing. And the comedy elements in there as well are very nice.”

“[Shen Yun] feels like going to a totally different culture,” Bernal, a social worker, said. “The environment is just beautiful. The music, the costumes. I loved the perfection. It feels so perfect, all the moments, and also the expressions of the dancers is very emotional. So, I love it.”

Wright said he didn’t think he could explain it better than Bernal did, but added, “Each scene is different. You can tell all the costumes and—there’s so much time put into it. It looks beautiful when it’s all together.”

Of Shen Yun’s roughly 20 vignettes, classical Chinese dance is the primary medium used to portray stories as well as ethnic and folk dances. To create the most colorful, memorable performance that they can, Shen Yun’s artists choose stories drawn from China’s many dynasties and legends and even from present-day events going on in the country.

As for the spiritual component to the performance, Bernal pointed out the way the unique artistry expresses China’s soul.

“I agree,” Wright added, “but one thing we were talking about was, there is this connection between cross-culture pieces, where you have pieces [in Shen Yun] like Mongolia, where you have this cowboy theme going. And there is that in America as well in different parts. We have many things in common.”

The effort of Shen Yun’s artists to restore authentic Chinese culture to the world is a welcome one for the pair.

“Yes. I think this is good for all generations,” Wright said. “I liked that [they] put some more newer events and political issues that are still going on.” The scenes set in modern times illustrate China’s traditional values, albeit in an unfortunate context. In China today, those who wish to practice their faith in the divine are persecuted.

“That’s a part of history that should be taught,” Wright added. “I think it’s good.  You need all the sides to show the history from everywhere and it’s shown well. It’s nice.”

Bernal had the last word and Wright agreed with her eloquent insights.

“[Shen Yun] really transcends,” she said. “As we said, it’s cross-cultural. The spiritual part is not only about religion, because there’s so many different religions [depicted in the performance], there is a human spiritual component that we can all relate to, and I think it is very well expressed in the pieces.”

With reporting by Linda Lee and Brett Featherstone.