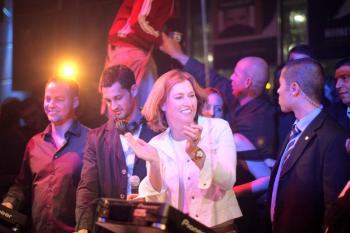 Hadas Amit, a 22-year-old Israeli, is like 20–30 percent of Israelis—they are still not sure whom to vote for in the coming elections on Feb. 10.  “Everything I know about the candidates and the parties is what they tell about themselves, and what others say about them. I do not trust either the parties or the media to tell me the truth that I need to know,” said Amit.

Different polls in Israel show that 20–30 of voters have not yet decided for whom they will vote. A feeling of ‘voter apathy’ was also shown in the recent municipal elections in Israel with extremely low participation. For example, the voting rate in Tel Aviv was only about 37 percent.

Encouraging Others to Vote

Yaniv Shaham, a 34-year-old from Tel Aviv who is in the movie industry, was worried to see the low municipal voting rate in November 2008. He thought that it was amazing “compared to the importance of choosing a mayor on your life,” he told The Epoch Times.

“I have investigated the issue and figured out an amazing phenomenon of a steady decline in voting rate, which is expected to decline to less than 63 percent in the coming elections,” he said.

“When I detected that there is a problem, I said ‘I want to do something about it.’ As a director and screenplay writer, I’ll try to use this tool that I have to produce a series of short videos that will make people think differently about not going to vote,” he said. With a few of his friends, he voluntarily established an Israeli website that encourages people to think, decide, and vote.

Another poll in Israel shows that a large number of Israel’s younger generation is considering not voting at all. Shaham believes that the reason is that people “do not understand the consequences of complete uninvolvement, and do not find it important to take part in the democratic process, which is most worrisome.”

Itai Amato, 24, from Nes Ziona, is the CEO of Software House, and has established the website “No Stance,” with the goal of helping people to choose and encourage them to vote.

The website offers a questionnaire that is supposed to show a person, by a statistical algorithm, the best party for that person.

Over 30 parties are participating in Israel’s 2009 elections. Amato’s Web site also includes a brief version of each party’s platform to help the citizens who still haven’t decided to quickly know the causes of each party and to choose to which one to vote for.

“The idea appeared a few months ago after seeing when talking with friends about politics that people don’t even know what the parties have to offer. For me it was inconceivable.”

Not Unique to Israel

Prof. Tamar Herman of the Israel Democracy Institute explained to The Epoch Times that there is a deep change in the Israelis’ attitude towards politics. “This is not unique to Israel, this is shown in other representative democracies in the world. There’s a high level of skepticism, detachedness from the political system, lack of trust in the politicians’ dignity and ability to deal with the problems at stake, and this of course affects people’s attitude regarding the elections.”

“In the recent elections in France and then in the U.S., the politicians decided against holding superficial campaigns and really showed two alternative world views.” She believes that the raising voting rate in those two cases was the result of this.

Israel has an electoral system based on nationwide proportional representation. The number of seats that each party list receives in the Knesset—the House of Representatives—is proportional to the number of votes it receives. To gain a seat, a party must pass the qualifying threshold, currently 2 percent of the national vote. There are a total of 120 seats in the Knesset.

Israelis don’t vote for prime minister or president—the party that gets the maximum votes basically gets the opportunity to gather a coalition in order to establish a government. If it succeeds, its leader will be the prime minister.

Every Israeli citizen of 18 years of age or older has the right to vote. However, voting is restricted to the voter’s permanent place of residence. Soldiers on active duty vote in special polling stations in their units, and arrangements are made for prison inmates and hospital patients. There are no absentee ballots.

Elections take place every four years, though the Knesset can decide, by an ordinary majority, to dissolve itself and call for early elections.

The candidates of any list are elected to the Knesset in the order in which they appear on it. If a certain party received sufficient votes for 10 seats, the first 10 candidates on its list will enter the Knesset. If a Knesset member passes away or resigns his seat in the Knesset, the next on the list will replace him or her.

In this period, major, far-reaching and rapid changes took place in the make-up of the population, and various groups sought political representation. Many parties were created to represent specific sectors or causes. This situation has peaked this year.