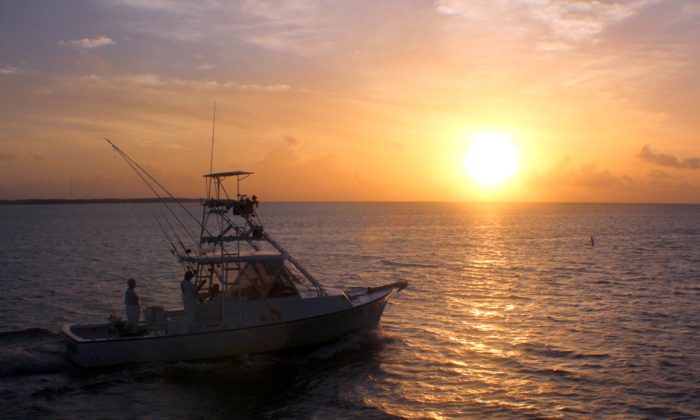 Ponce de Leon called them ‘Los Martires.’ Tangled islands that twisted down Florida’s Atlantic coast. Twenty years after his discovery, when a hurricane swept the treasure laden Spanish fleet ashore in 1733, the islands became legend. To this day the lure of sunken treasure beckons.

Another terrible hurricane in 1906, followed by three more, destroyed Henry Flagler’s fledgling Overseas Railway. Despite hardships and storms, the visionary, sick and aged, saw his railroad completed and rode the first train from Miami to Key West in 1912.

Flagler’s dream, or Flagler’s folly, as some dubbed the momentous bridge and trestle building, ended with the depression. The right of way was sold and is now the Overseas Highway or US 1. The road runs down the Florida Keys starting south of Homestead to Key West. Mile Markers (MM) along the way designate the distance to Key West where many tourists pose with the final sign that proclaims ‘0.’

Islamorada got its name from one of J.B. Pinder’s schooners. It could have been named equally for purple flowers that bloom from tangled bushes that grow along the ocean. Islamorada is a collection of islands dubbed “The Sport Fishing Capital of the World.” It is one of the world’s most popular fishing destinations. Marinas and charter boats beckon sportsmen from around the globe. Islamorada is also a haven for divers that come to explore its offshore reefs.

Ken Nedimyer began the Coral Restoration Foundation to demonstrate that bits of staghorn and elkhorn coral recovered from the ocean could be grown then replanted. Conch Republic Divers, located at Tavernier Creek Marina on the bayside at MM 90.8, took Pam Hughes, the Foundation’s Safety Officer and a group of volunteer divers out to work on the project.

“We can’t dive at the nursery unless we go with someone from the Foundation,” Brenda said. She checked divers in and made sure everyone had what they’d need for the two scheduled dives. The first was to be at the coral nursery. The second on a site where divers would use underwater epoxy to cement harvested branches of staghorn coral to the reef.

The Foundation’s project is an amazing undertaking. The National Marine Sanctuary has expanded their permit to include brain and fire corals. “After the huge spawning of our replanted corals last year people realize that there is hope,” Pam told the volunteer divers. She provided instruction and the tools necessary to clip living corals from more than an acre of underwater nursery. Nursery coral is grown on Christmas tree-like branches supported by floaters. The trees are anchored to the bottom on flexible connections.

At the transplant site divers chipped away bare coral rock substrate while Pam mixed epoxy and handed them bits with which to cement the branches they transported from the nursery. The dives were interesting and productive.

Diving with Captain Spencer Slate is always an adventure. This Winston Salem, NC native and former school teacher came to the Keys in 1978. In February 2014, he moved his dive operation to Tavernier Creek on the oceanside at MM 90.7. The newly refurbished building houses his shop, compressors and dive tank storage facility. His three dive boats are backed up to the dock behind his facility.

Most everyone that has ever picked up a magazine will recall photographs of Captain Slate feeding moray eels and barracudas. He has the scars to prove that it is not always an easy undertaking. While feeding marine life underwater has been proscribed in Florida waters, beyond the three-mile limit, in the National Marine Sanctuary, feeding is permitted. It is great fun to watch this ‘Pied Piper’ of the underwater world search out his favorite green moray eels and produce sardines from his bucket of bait.

“I’ve been diving for 51 years. I took over feeding from Steve Klem. He befriended me when I came here in 1978. Steve was dubbed the ‘Pied Piper of Pennekamp.’ I don’t do it for a show. I want to demonstrate that these ‘dangerous’ marine creatures need respect and protection. I do not even have a fishing pole. I take nothing out of the ocean,” Captain Slate explained.

Key Dives is located at MM 80 on the oceanside at Bud N’ Mary’s Marina. Captain Ken Wangren is also a divemaster. When he is not driving ‘Giant Stride,’ their 42-foot Newton dive boat, he guides divers. We went to the wreck of the ‘Eagle.’ This 287-foot long freighter was sunk as an artificial reef in 1985. The wreck lies on its side, 70-feet to the superstructure, 110-feet to the sand.

Clear visibility offers panoramas of the whole shipwreck underwater. While photographing at the stern, a female loggerhead turtle swam up over the side and posed for pictures next to a diver. Masts and funnel make the ‘Eagle’ a popular and photogenic dive site in Islamorada.

Stretching from MM 90 to 72, the four keys that make up Islamorada offer a variety of scenery from ocean to bay. Fine dining abounds. For magnificent sunsets right on the bay Marker 88 Restaurant has it all. Outside dining, a long pier to tie up for boaters, a sandy beach as well as chairs to watch the sunset. There is outside as well as inside dining right on the water. Their fabulous wine cellar offers plenty of choices. The tiki hut outside bar is the place where exotic cocktails are stirred up.

S.A.L.T. Restaurant is a new eatery at MM 82.7 oceanside. Their Cana Lounge is a great place to decompress after a day of diving. Chef George will cook up some mighty good grub for the hungry diver.

For those seeking unique and delicious, try Oo-Tray Restaurant at MM 80.9 oceanside. Chef David is an artist in the kitchen and tastes here are sensational. There is a patio bar and outside dining as well as an air-conditioned dining room.

Islamorada has it all. Great sport fishing with experienced captains like Steve Stough, a dedicated diver who always has tanks and gear aboard. Steve operates his 53-foot Hatteras, ‘Warrior,’ out of the Whale Harbor Marina.

Islamorada has great reef diving in 25 to 30-feet. Fish are everywhere and are not afraid of divers. That has to be said since divers travel to far reaches of the Caribbean where many reefs have been decimated by over-fishing to the point where nothing much remains. Offshore Islamorada reefs are healthy and vibrant with lots of fish since it is a marine sanctuary. There is usually amazing visibility. There are shipwrecks galore and well-equipped dive operations.

Not to be missed is the History of Diving Museum at MM 83 bayside. The displays, library and gift shop are unique. The museum houses the largest collection of diving helmets in the world and traces the history of diving from ancient to modern times.

For more information about Islamorada call their Chamber of Commerce toll-free at 1-800-FAB-KEYS or 305-664-4503 or visit their website at www.islamoradachamber.com. The visitor center is located in Founder’s Park at MM 87 bayside where a Miller Dunn diving helmet, on loan from the History of Diving Museum, offers a chance to poke your head inside for pictures.