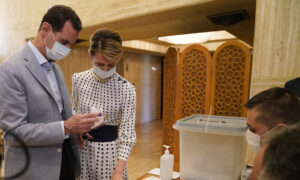 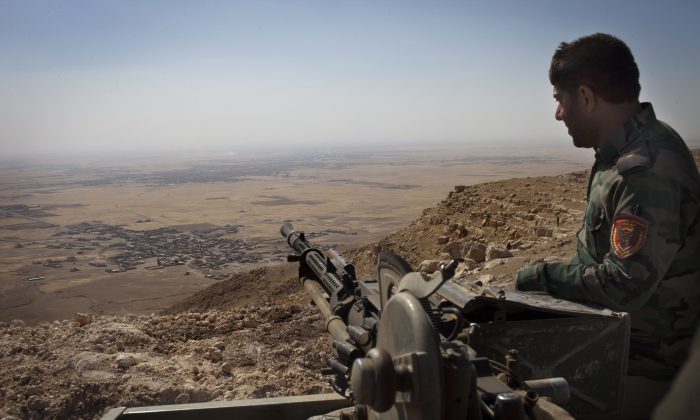 An Iraqi Kurdish Peshmerga fighter hold his position on the top of Mount Zardak, a strategic point taken 3 days ago, about 25 kilometres east of Mosul on Sept. 9, 2014. (J.M. Lopez/AFP/Getty Images)
Middle East

BAGHDAD—Militants from the Islamic State group blocked all mobile phone networks in the largest Iraqi city they control, Mosul, accusing informants in the city of tipping off coalition forces to their whereabouts, residents told The Associated Press on Thursday.

Residents described a scene of “chaos” and “paralysis” in the city Thursday, a day after the militants announced their decision on their Mosul-based radio network. Businesses were at a standstill as residents tried to understand what was happening, they said. Some are still able to access the Internet, which operates under a different network.

All residents spoke on condition of anonymity for fear of reprisal.

The militants seized the city in June during their lightning advance across northern Iraq, after the Iraqi military virtually crumbled when confronted by the group. The U.S. began launching airstrikes on Aug. 8 and has conducted at least 22 strikes around the city of Mosul alone.

The city has come to represent the expanding power and influence of the extremist group, which was born in Iraq but spread to Syria, where it grew exponentially in the chaos of the country’s civil war. Abu Bakr al-Baghdadi, the group’s reclusive leader, made his first video appearance in Mosul in July to announce his vision for a self-styled caliphate, a form of Islamic state.

Baghdad-based political analyst Hadi Jalo said that this move by the IS group is a clear sign that the militants are losing confidence after a string of recent victories by Iraqi troops, backed by Shiite and Kurdish militiamen.

“Even the people in Mosul, who hate the Shiite-led government, are becoming less sympathetic with the militants — whose main victims are Sunnis, not Shiites, nowadays,” said Jalo.

An official in one of the Iraqi mobile phone operators said his company is investigating the issue, but declined to give further details.

The shutting down of phone lines is a notable change from what has been the group’s core strategy so far — focusing on providing services and establishing administration in areas it controls to win support of the locals. In parts of Syria under its control, the group now administers courts, fixes roads and even polices traffic. It recently imposed a curriculum in schools in its Syrian stronghold, Raqqa, scrapping subjects such as philosophy and chemistry, and fine-tuning the sciences to fit with its ideology.

The Britain-based Syrian Observatory for Human Rights said one of the raids struck the house of a judge facing the Islamic State group’s tax collection center. Another air raid targeted an IS group checkpoint.

An activist who uses the name Abu Ibrahim al-Raqqawi said eight airstrikes killed at least seven people, including four women and a child. Al-Raqqawi, who is based outside Syria, heads a collective of activists on the ground in Raqqa.

On Tuesday, similar airstrikes killed at least 95 people in Raqqa, most of them civilians. U.S. State Department spokeswoman Jen Psaki said she is “horrified” by the reports that Syrian government airstrikes had killed dozens of civilians and demolished residential areas.

From The Associated Press. AP writer Vivian Salama in Baghdad and Bassem Mroue in Beirut contributed to this story.