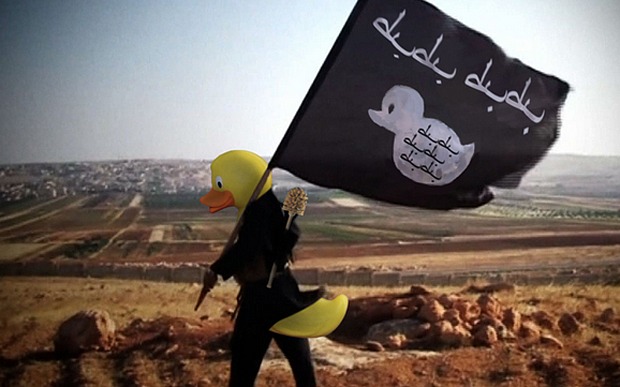 The Islamic State, or ISIS, has been the subject of online ridicule as members of the imageboard 4chan superimposed photos of rubber ducks onto the terrorist group’s fighters. The photos then spread to Twitter and Facebook.

“How about castrating the image of Isis by replacing the faces on ALL the propaganda photos with bath ducks?” one person wrote on the 4chan section S4S, reported the Guardian.

Isis is way less scary when you make them rubber ducks pic.twitter.com/W3A9up5iMX

This had me quacking up,” wrote one Reddit user. And another asked: “Would you rather fight 1,000 duck-sized Isis members, or one Isis-sized duck?” The user was referring to a common meme.

Another added: “This is how we fight Daesh. Humiliate them.” The user is referring to another term for ISIS, also known as ISIL or just IS.

Some also took ISIS’ black flag and replaced it with the image of a duck and the word, “QUACK.”

The idea of replacing faces of IS members with bath ducks to mock them is a beautiful thing. https://t.co/pgMhIY29XA pic.twitter.com/PeWEvoV0to

At the same time, the hacker collective Anonymous along with Ghost Sec have gone after ISIS Twitter accounts and its websites.

Ghost Sec recently hacked a deepweb ISIS site and replaced it with a message that read: “Too much ISIS.”

“Enhance your calm. Too many people are into this ISIS-stuff. Please gaze upon this lovely ad so we can upgrade our infrastructure to give you ISIS content you all so desperately crave,” it said, New York Magazine reported.

The site was taken down and replaced for an ad for an online pharmacy.

Anonymous also claims that thousands of Twitter accounts were taken down in the wake of the Paris attacks that left 130 people dead. ISIS claimed responsibility for the attack.