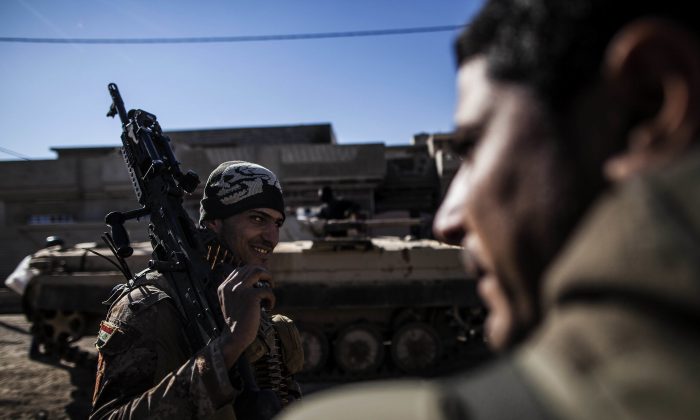 An Iraqi soldier from the 9th Infantry Division holds his machine gun while heading to the frontline in Shyma district in Mosul, Iraq, on Dec. 6, 2016. (AP Photo/Manu Brabo)
International

MOSUL, Iraq—Iraqi army said on Wednesday that ISIS militants launched an overnight attack against security forces in the southeastern part of Mosul, a day after the troops advanced deeper into the city.

“What we see here is the enemy reacting to a new axis of advance,” said coalition spokesman U.S. Army, Col. John Dorrian, explaining that the new push putting increased pressure on ISIS.

After the advance on Tuesday, Iraqi forces said that they pushed the front line back more than 2 kilometers (1.2 miles) and retook Mosul’s al-Salam hospital, but only a few hundred meters (yards) appeared to be secured and clashes continued into the evening.

When Iraqi forces initially launched a push into eastern Mosul in early November, troops came under heavy counterattacks after advancing too far too quickly. ISIS militants depend on suicide car bombs and sniper fire to derail the security forces, as well as a network of underground tunnels.

The Iraqi government has not publicized the casualty figures for government troops and paramilitary forces fighting in Mosul and elsewhere in northern Iraq. Last week, the U.N. said in a report that nearly 2,000 members of the Iraqi forces were killed last month, but after coming under fire from the media arm of the Iraqi military, it announced it would discontinue publishing casualty figures for Iraq’s security forces.