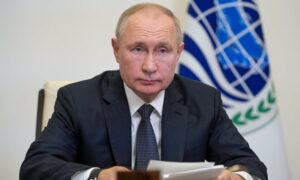 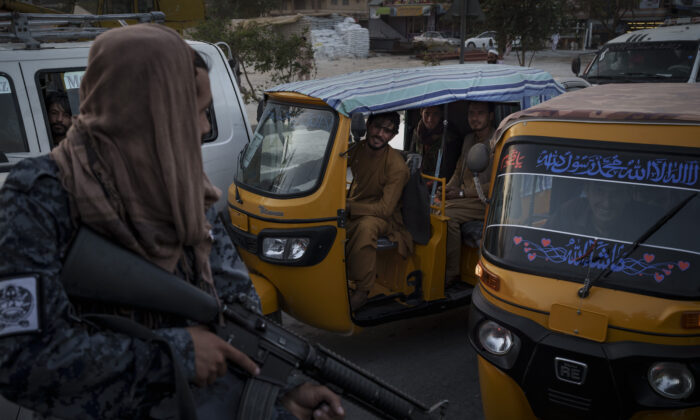 Afghan drivers and passengers stuck in a traffic jam look at Taliban fighters riding in the back of a pickup truck in Kabul, Afghanistan, on Sept. 20, 2021. (Felipe Dana/AP Photo)
Afghanistan

A string of explosions struck Taliban vehicles in Afghanistan’s provincial city of Jalalabad over the weekend, killing eight people, among them Taliban fighters. On Monday, three more explosions were heard in the city, an ISIS stronghold, with unconfirmed reports of additional Taliban casualties.

The Taliban are under pressure to contain ISIS terrorists, in part to make good on a promise to the international community that they will prevent the staging of terror attacks from Afghan soil. There is also a widely held expectation among conflict-weary Afghans that, despite fears and misgivings about the Taliban, the new rulers will at least restore a measure of public safety.

“We thought that since the Taliban have come, peace will come,” said Feda Mohammad, a brother of an 18-year-old rickshaw driver who was killed in one of Sunday’s blasts, along with a 10-year-old cousin.

“But there’s no peace, no security. You can’t hear anything except the news of bomb blasts killing this one or that,” Mohammad said, speaking at the family home where relatives and neighbors gathered for a memorial ceremony, drinking black tea and reciting verses from the Quran.

The latest ISIS bombings come as the Taliban face the daunting task of governing a country shredded by four decades of war. The economy is in free fall, the health system on the verge of collapse, and thousands of members of the country’s educated elite have fled. International aid groups predict worsening drought, hunger, and poverty.

“Our misery has reached its peak,” Abdullah, a shopkeeper in Jalalabad, said Monday, a day after ISIS claimed responsibility for the bombings that rocked the city the two days before.

“People have no jobs, people sell their carpets to buy flour … still there are explosions and (ISIS) claims the attacks,” said Abdullah, who, like many Afghans, goes by one name.

The weekend bomb blasts served as a reminder of the threat the terrorists pose. Just weeks ago, as American and foreign troops completed their withdrawal and frantic airlift from the country, ISIS suicide bombers targeted U.S. evacuation efforts outside Kabul international airport in one of the deadliest attacks in Afghanistan in years. The blast killed 169 Afghans and 13 U.S. service members.

The events have bolstered fears of more violence, as ISIS terrorists exploit the vulnerability of an overstretched Taliban government facing massive security challenges and an economic meltdown.

“They’re making a very dramatic comeback,” Ibraheem Bahiss, an International Crisis Group consultant and an independent research analyst said of ISIS. “There could be a long-term struggle between the groups.”

For now, the Afghan affiliate of ISIS has shied away from attacks against the West and maintained a local focus, but that could potentially change, Bahiss said.

The aims of the ISIS affiliate in Afghanistan are different from those of the Taliban, who seized control of the country days before the U.S. troop pullout last month. While the Taliban have fought to gain ground in Afghanistan, the ISIS chapter seeks to incorporate swaths of the country into a broader self-styled caliphate, or Islamic empire, across the Middle East.

The franchise, largely made up of Pakistani terrorists pushed across the border by military operations, first embraced the ISIS call for a worldwide jihad against non-Muslims in the months after the group’s core fighters swept through Syria and Iraq in the summer of 2014.

While they share enmity toward American forces and a harsh interpretation of Sunni Islam, the Taliban and ISIS are sworn enemies. Just as the Taliban battled U.S. coalition troops in the long Afghan war, the group also waged a successful offensive to drive ISIS terrorists from their enclaves in the country’s north and east—at times assisted by the United States and U.S.-backed Afghan government.

Despite years of U.S. airstrikes and other military setbacks that shrank ISIS ranks, the United Nations reported this year the group “remains active and dangerous,” a threat to Afghanistan and the wider region. The affiliate has mounted some of the country’s most brutal attacks in recent years on schools, mosques, and even a maternity hospital, mainly targeting the Shiite Muslim minority.

The affiliate has increasingly drawn hard-line Taliban defectors and foreign fighters disillusioned with what they see as the Taliban’s overly moderate ways. The New York-based Soufan Center said in an analysis on Monday that the franchise poses “one of the most serious risks to future splintering of the Taliban … at a time when the group is seeking to gather strength and play a major spoiler role in Afghanistan.” As a power struggle between pragmatists and ideologues in the Taliban leadership intensifies, the ISIS branch has ramped up recruiting efforts.

For now, Taliban forces far outnumber ISIS militants and experts doubt the extremist group poses an existential threat to Afghanistan’s new rulers. But if the bombings continue, said Franz Marty, a Kabul-based fellow at the Swiss Institute for Global Affairs, “it could become a large problem.”

“It’s impacting people’s perceptions. If the Taliban can’t make good on their promise on securing the country, that could turn the tide of public sentiment against them in the east,” he said.

Despite the residents’ concerns in Jalalabad, there had been a marked improvement in pubic safety elsewhere, including the capital of Kabul. Before the Taliban takeover, Kabul had been plagued by a sharp increase in crime, and many residents feared to leave their homes after dark.

But in Jalalabad, the grief-stricken father of the 10-year-old boy killed in Sunday’s blast described the recent attacks as an ominous portent.

“We live in poverty and we don’t have security, either,” said Zarif Khan. “Today, my son lost his life, tomorrow others’ sons will lose their lives.”

By Isabel Debre And Rahim Faiez