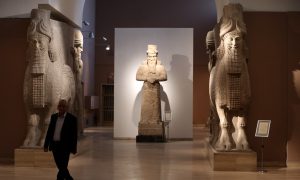 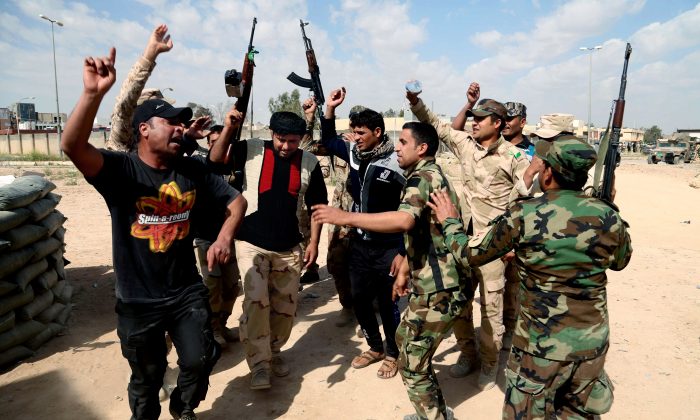 Iraqi fighters chant slogans against extremists at the front line during a battle against ISIS militants in Tikrit, Iraq, on March 16, 2015. (AP Photo/Khalid Mohammed)
Middle East

With the beheadings and public executions, it might seem that ISIS is the worst thing to happen to Iraq in a while.

But that isn’t the case, says the former head of the CIA.

Gen. David Petraeus, who led U.S. troops in Iraq during the surge in 2007-2008, said that Iran-backed Shiite militias are a greater threat to Iraq’s stability than ISIS, known the Islamic State in Iraq and Syria. Currently, Shiite militias are fighting ISIS in several parts of the war-torn country.

“The foremost threat to Iraq’s long-term stability and the broader regional equilibrium is not the Islamic State, it is Shiite militias, many backed by — and some guided by — Iran,” Petraeus told The Washington Post.

Petraeus made reference to Iran’s Qassem Suleimani, the country’s military mastermind, who is currently implementing a strategy to deploy Iranian assets to fight ISIS. Suleimani was on the front lines against ISIS in Tikri.

“Yes, ‘Hajji Qassem,’ our old friend,” Petraeus added. “I have several thoughts when I see the pictures of him, but most of those thoughts probably aren’t suitable for publication in a family newspaper like yours.”

Petraeus then spoke of Shiite militias who have “returned to the streets of Iraq in response to a fatwa by Shia leader Grand Ayatollah Sistani.”

“Longer term, Iranian-backed Shia militia could emerge as the preeminent power in the country, one that is outside the control of the government and instead answerable to Tehran,” he said.

“Beyond Iraq, I am also profoundly worried about the continuing meltdown of Syria, which is a geopolitical Chernobyl. Until it is capped, it is going to continue to spew radioactive instability and extremist ideology over the entire region.”

On Friday, a group claiming to be a Yemeni branch of the Islamic State group said it carried out the bombings and warned of an “upcoming flood” of attacks against the rebels, known as Houthis, who have taken over the capital and much of Yemen. The claim, posted online, could not immediately be independently confirmed and offered no proof of an Islamic State role.

If true, Friday’s bombing would be the first major attack by IS supporters in Yemen and an ominous sign that the influence of the group that holds much of Iraq and Syria has spread to this chaotic nation. The claim was posted on the same web bulletin board where the Islamic State affiliate in Libya claimed responsibility for Wednesday’s deadly attack on a museum in Tunisia.

A significant presence of Islamic State group supporters would add an alarming new element to the turmoil in this fragmenting nation. Yemen is already home to the most powerful branch of the al-Qaida network — which is a rival of IS. On Friday, al-Qaida militants seized control of a southern provincial capital, al-Houta, in the group’s most dramatic grab of territory by the group in years.