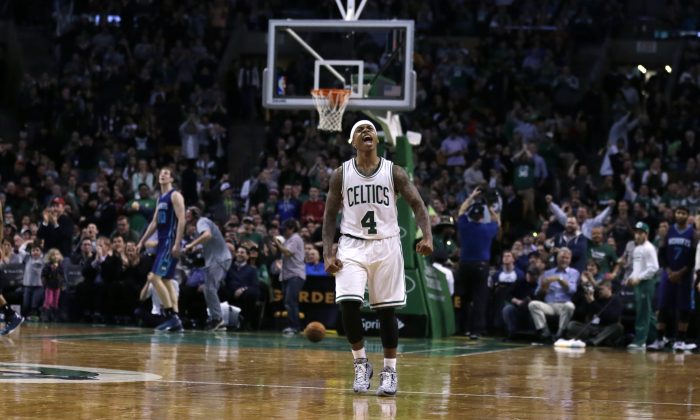 Isaiah Thomas says that it’s crazy playing for the Boston Celtics following the recent trade from the Phoenix Suns.

“It’s so surreal, it doesn’t even seem real,” Thomas told Basketball Insiders of wearing a Celtics jersey. “I’ve been in purple since college – from UDub (Washington) to Sacramento to Phoenix. Now, wearing the all green Celtics jersey is just so crazy. It’s so legendary and there’s so much history behind it.

“And the fans in Boston, whether it’s on social media or in person, they’ve shown me so much love and the market is so much bigger. Man, everything about it is crazy. It’s really a basketball city.”

Thomas was surprisingly sent from the Suns as Phoenix completely shifted its strategy, also shipping out Goran Dragic and Tyler Ennis and bringing in Brandon Knight.

Thomas, 26, signed a four-year, $27 million contract with the Suns in the offseason after starting his career in Sacramento. The contract is viewed as one of the most team-friendly in the league for a point guard of Thomas’s caliber, since the cap will rise so much in two years.

Thomas admitted he was blindsided by the trade, being informed by teammate Brandon Wright on the team bus they were on that was about to take players to the airport for the Suns game against Minnesota.

But Thomas is optimistic about the move, especially because he’s joining such a storied franchise and has childhood friend Avery Bradley by his side. Plus, Boston has a legitimate shot of making the playoffs.

“I got even more excited [about the trade] because all I want to do is make the playoffs. I started thinking, ‘Man, we got a realistic chance of making the playoffs – this year and for years to come because the East is so wide open,'” Thomas said.

He has been trading tips with rookie Marcus Smart, who currently starts at point guard. Thomas is in a sixth man role, averaging 21.8 points off the bench in six games so far. Thomas has been advising Smart on some offensive maneuvers while gleaning defensive tips from him.

Boston and general manager Danny Ainge have been trying to acquire Thomas for quite a while, and have now finally got him. And the guard is pleased.

“I think we can be really good,” Thomas said. “We’re young right now and learning. We have a great, young head coach in Brad Stevens and a great coaching staff, and then I feel like everybody in the organization – from Danny Ainge down – knows how to build championship teams. Making the playoffs this season is the goal, and I’m excited for the future. Hopefully I can be here for a while.”