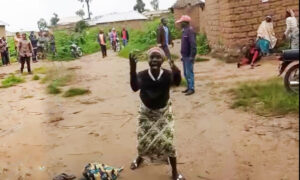 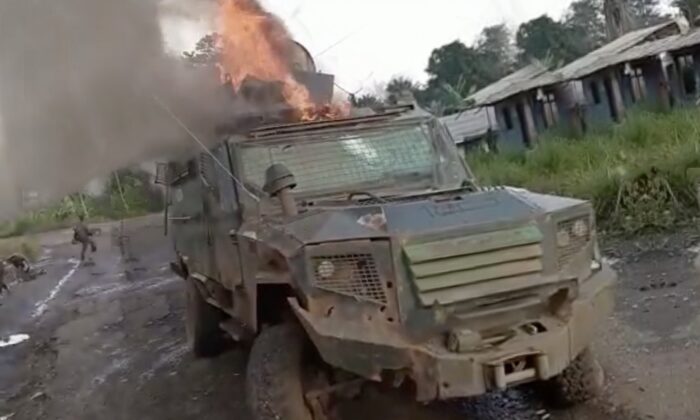 A screenshot from a video released by Ambazonia rebels showing an armored personnel carrier on fire on Sept. 14 in the Northwest region of Cameroon. (screenshot Ambazonia rebel video/The Epoch Times)
Africa

Is Rebellion in Cameroon a Bellwether for Nigeria?

A recent strike by rebels in northwestern Cameroon has sparked speculation that separatist groups in Nigeria’s Southeast and Cameroon’s border areas are on parallel tracks.

The English-speaking rebels in Cameroon’s mountainous border zone with Nigeria are fighting for national independence from the Francophone majority under the banner of a self-proclaimed nation of “Ambazonia.”  Their cause resonates with the separatist movement in Nigeria’s southeast that is seeking an independent Biafra, feeding speculation that both nations are heading toward breakups.

After five bloody years of guerilla strikes in Cameroon and brutal responses, both sides in the conflict stand charged with serious human rights violations, according to Voice of America.

The conflict reached a grim milestone last week, when the armed rebels, using improvised explosive devices (IEDs) and an anti-tank rocket launcher, ambushed two convoys of Cameroon’s elite force in the Northwest, killing 15 soldiers. The Cameroonian military reportedly said on Sept. 22 that anti-tank rockets smuggled from Nigeria had been used for the first time, and 13 civilians were also killed.

The war in the two English-speaking regions of Cameroon—called the Northwest and the Southwest regions—has left more than 4,000 people dead, while close to a million others have been displaced internally. More than 60,000 others have sought refuge in neighboring Nigeria.

The worsening humanitarian crisis resulting from the conflict has pushed some U.S. lawmakers to petition the Department of Homeland Security to designate Cameroon for Temporary Protected Status, which means Cameroonian migrants entering across the southern U.S. border can’t be refused entry.

“All serious pro-separatist groups pick inspiration from those that have succeeded before them with a similar template,” according to David Otto, a native Cameroonian and the director of counterterrorism for the Geneva Centre of African Security and Strategic Studies.

“There is already an existing alliance between some Ambazonia separatist leaders and Biafra leaders which makes it much easier for both separatist groups to benefit from each other. Depending on how these leadership alliances are sustained, there is no doubt that the independence of one could easily translate to a moral and support boost for the independence of the other, despite not having the same underlying case for separation,” Otto added.

“This battlefield connections and sympathy for the cause provides a huge morale boost for separatist leaders and supporters to feed off each other in the region. This ideological contamination is made easy by the existing sharing of strategic, operational, and tactical expertise—a real case of coordination and collaboration. In conflict dynamics, where sustainability and survival are crucial, unlike parties can easily become regular bedfellows. I see this happening between Ambazonia, Biafra, and the southwest clamor for separation,” Otto told The Epoch Times.

A two-week lockdown on the two Anglophone regions announced by the secessionist groups since Sept. 15 is meant to assert their control over the territory.

“The Cameroon government had hoped to present itself to the United Nations General Assembly this month to tell the world that they had control over the conflict and that the war is dying down, but the rebel ambush Sept. 16 has embarrassed them,” Chris Anu, communications secretary of the U.S.-based interim government of Ambazonia, told The Epoch Times.

Anu said, “The government of Cameroon is fighting a lost battle.

“They blundered. We did not ask them for war. If the international community thinks that they can stay quiet and demoralize Ambazonia or from attaining its independence, that can only prolong the duration of the conflict. That is not going to stop us from pursuing and prosecuting this war. Ambazonia at the end of the day will be a free country. Nothing is stopping us.”

Cameroon’s military insists that victory over the rebels is certain.

“The Cameroonian army remains determined to eradicate all forms of violence in the Northwest, Southwest, and Far North,” according to Atongfack Guemo Cyrille Serge, spokesman for the Cameroonian military, said in a statement.

But a Cameroonian academic made the case for Ambazonian independence.

“Cameroon is laboring like a pregnant woman—it may be the labor phase of a new nation—and we should honor it because it is part of governance, democracy, and human rights,” Wilson Tamfu, professor of public and international law at the University of Buea, told The Epoch Times. The University of Buea is in the Southwest region of Cameroon.

“If people cannot stay together for certain reasons, and they have tried to stay together, it’s not working, there is nothing wrong in the creation of new states. People can live together, love one another, enrich one another; but if another group feels oppressed, disadvantaged, you have to take steps—by revising the constitution for instance. Europe broke away into states; the former Soviet Union broke away into 18 independent states. This is not a disloyalty or a crime.”