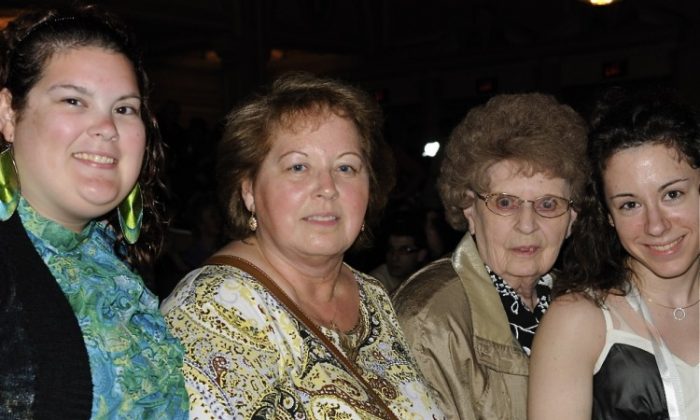 PHILADELPHIA—Ms. Pirocek, from Virginia, and her two daughters, Frances and Melissa Boffa, both Irish dancers, were at Philadelphia’s Merriam Theatre, on May 8, enjoying the experience of classical Chinese dance and music being presented by Shen Yun Performing Arts Touring Company.

Frances Boffa, a professional Irish step dancer for ten years, said, “We’re both Irish dancers so we like different cultures.”

She was inspired by the professionalism of the dancers. “All the precision, the costumes, they’re beautiful,” she said.

“I liked the cultural significance and the richness of it. The choreography, everything, I love it,” she added.

Classical Chinese dance is rich with expressive power, says the company’s website. Through expression of bearing and form, beautiful dance movements bring out the inner meaning of intrinsic thoughts and feelings, reflecting the peculiarities of human nature, the standard for human conduct, moral concepts, mental state, one’s value system, and so on.

Frances could sense the inner richness of the dances. “It’s sort of like [the performance] exceeds just the dance and goes beyond … to cultural freedom and expression, and [it is] as if life itself were reflected in the show. It was wonderful,” she said.

Melissa was also thoroughly enjoying the performance. “It’s very fluid, very cohesively designed together. The choreography is amazing. So I love all of it. It’s amazing, ” she said.

Based in New York, Shen Yun presents traditional Chinese culture as it once was: a study in grace, wisdom, and the virtues distilled from the five millennia of Chinese civilization, according to the company.

Ms. Pirocek said the performance was “beautiful,” and she enjoyed the combination of dance and music.

She was particularly impressed by the dance Joyful Little Monks, in which the serenity of a secluded monastery invites pure thoughts and peaceful living. On a bright morning, apprentice monks gather to tidy up the temple with brooms, basins, and wash-clothes. Eager to do well, they put their hearts into their work-with fun and humorous results, says the company’s program.

Ms. Pirocek was also captivated by the dance Flower Fairies where flower blossoms transform into fluttering fairies to join in ethereal dance. She loved the soft pink skirts and gossamer capes worn by the dancers who glide across the stage like petals adrift in the wind, according to the program.

The company’s website states that after more than 60 years of Communist rule in China, and especially after the Cultural Revolution, Chinese traditional culture has been all but completely demolished.