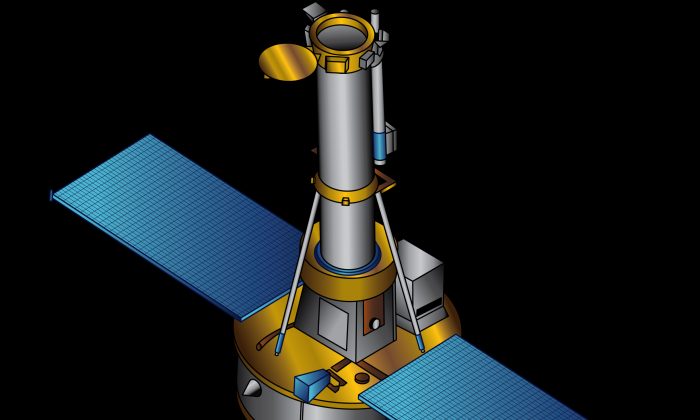 An artist rendition of the Interface Region Imaging Spectrograph (IRIS), a NASA Small Explorer Mission to observe how solar material moves, gathers energy, and heats up as it travels through a little-understood region in the sun's lower atmosphere. (NASA/LMSAL)
Science

NASA launched a new space observatory–propelled into Earth orbit by a rocket–to examine a region of the sun.

The IRIS spacecraft will point a telescope at the interface region of the sun, which lies between the surface and the million degree outer atmosphere called the corona. “It will improve our understanding of how energy moves from the sun’s surface to the glowing corona, heating up from 6,000 degrees to millions of degrees,” according to NASA.

“IRIS will show the solar chromosphere in more detail than has ever been observed before,” said Adrian Daw, deputy project scientist, in the launch announcement. “My opinion is that we are bound to see something we didn’t expect to see.”

The observatory will help monitor solar activity such as the closely-watched coronal mass ejections and solar flares, which have been getting more frequent and powerful recently.

A rocket, the Orbital sciences Pegasus XL, took IRIS into Earth orbit. First, a plane from the Vandenberg Air Force Base in California will take the rocket and its payload about 39,000 feet into the air, then the plane dropped the rocket. Five seconds later, the Pegasus ignited and arched skyward. After three stages of propulsion, IRIS was in orbit, 10 minutes after the launch.

“I think the biggest surprise will come once the mission is launched and it starts to observe the sun,” Daw said. “We know to some extent what we hope to learn, what specific science questions we are going to answer, but there’s always that element of surprise.”

IRIS will complement information and photos brought in from the Japanese Space Agency’s Hinode solar observatory, as well as NASA’s Solar Dynamics Observatory.